Test Tubes in the Kitchen 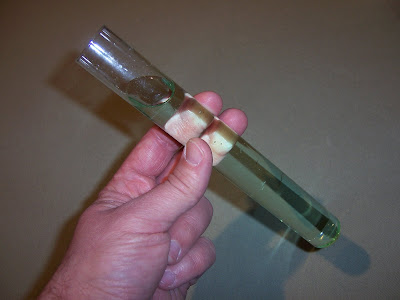 Trying to mix the two is like trying to blend oil and vinegar.

I’ve spent a lot of time learning chef skills, but chemistry has never been a core competency. In high school, I would get excited when the Language Department hosted the annual International Dinner, or when the Home Economics Class invited me to taste test their final project. But, I would frequently nod off during Chemistry class, and in fact, earned the worst grade of my entire student career in Chemistry.

Given a choice between the Periodic Table or Tarte aux Pommes, I’ll take the pastry every time.

So, even I admit to being baffled by my current fascination with that odd hybrid of chef and chemist, the molecular gastronomist.

The term molecular gastronomy is a mouthful, with a dash of pretentiousness, advanced degree snootiness and food snobbery mixed in for good measure. It is a term that is still only whispered in the geeky fringes of the culinary movement. You’ve heard the rumors. These are folks who like to shake things up, manipulate tastes and textures and inject the flavor of foie gras into doughnuts, or serve beef tongue that tastes like a bologna sandwich. Who are these people who care more about molecules than mouth feel? Are food scientists chefs, foodies or a different breed altogether? They are reported to be a strange fusion of three-star chef and deranged scientific genius. Perhaps even more provocative, is molecular gastronomy art or science?

I’m intrigued by the questions, so I get in touch with my inner Louis Pasteur and decide to investigate this odd phenomenon of Bill Nye the Science Guy Meets the Galloping Gourmet.

In the spirit of full disclosure, it is a distinctly unscientific investigation.

I quickly latch on to a recent text – a Bible of the movement called, quite simply “Molecular Gastronomy: Exploring the Science of Flavor” written by Herve This. Monsieur This is a physical chemist, and the author of several books about food and cooking. Immediate answers may not be forthcoming. Monsieur This starts by discussing what molecular gastronomy is not. It is not cooking, and it is not food science, nor is it food technology. 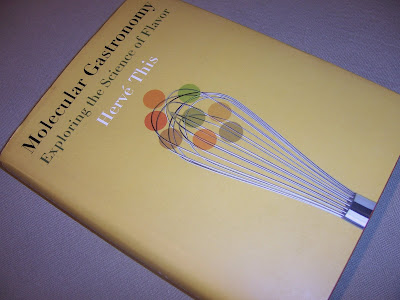 According to Monsier This, “…food science deals with the composition and structure of food, and molecular gastronomy deals with culinary transformations and the sensory phenomena associated with eating.” (p. 3)

So are we talking about some sort of higher calling here? At the very least, Monsieur This seems to be engaging in a game of analysis, investigation and myth busting. He wants to challenge culinary convention and gain a deeper insight into what works in the kitchen, and why it works.

Monsieur This says, “Time-honored maxims, proverbs, old wives’ tales, folk beliefs, and culinary rules are millstones round our necks that weigh us down when they are false and wings that carry us aloft when they are true. Hence the importance of molecular gastronomy, whose primary objective is first to make an inventory of such rules and then to select those that have withstood careful analysis. Culinary art has everything to gain by separating the wheat from the chaff of empirical observations.” (p. 12)

So, I guess it’s not enough to be thrilled by the fact that your soufflé actually rises (thank, God, by the way). The Molecular Gastronomist wants to know why the soufflé rises, and wants to improve the soufflé’s chances of rising higher. (That sounds a lot like the last employee motivation program I went through.) And it better taste darn good, while you’re at it. If we know why food molecules do their thing, we can manipulate the molecules, the techniques and our equipment to get better and more fantastic results.

Monsieur This writes: “Whoever understands the reasons for the results he or she obtains in the kitchen can improve on them.” (p. 17)

Then, there’s that aura of culinary enlightenment. I suppose those who can unlock the mysteries of the kitchen, are then able to go on and create phantasmagoric edibles like foie gras doughnuts, or beef tongue that tastes like a bologna sandwich, and will ultimately achieve inner peace. Is this a tastier version of yoga?

I am still left with many, many questions. At the top of my list: “Is molecular gastronomy really different than “cuisine” and what does the food actually taste like?” I enlist my friend Lee Sloan, a Grande Dame of food and wine to join me on a little tasting excursion to a restaurant on the East Side of Manhattan where the proprietor is reported to be both Chef Extraordinaire and Mad Scientist. We are about to subject our refined palates to a little culinary atom smashing.

Email ThisBlogThis!Share to TwitterShare to FacebookShare to Pinterest
Labels: Books on Food, Herve This, molecular gastronomy

I can't wait to read the results. There is a chef in the UK called Heston Blumenthal who is famous for using science in the kitchen and serving such wondrous things as Bacon and Egg Ice Cream and little puffs of dry ice to cleanse the palate between courses. I find it all quite exciting but a bit 1950s space age at the same time.

Seeing as I still have nightmares about high school chemistry, I don't think I'll be a food scientist anytime soon. It is a fascinating topic though, and I appreciate your post.

I've never imagined seeing my kitchen through more scientific eyes, but it's rather brilliant :) How very insightful!

It's very interesting to read about molecular gastronomy. I have not had the pleasure in a place like that yet. Although I have bought a ISI canister to do some experiments....

KP - I'd never thought of it before myself, but when you think of the fact how just heat alone transforms food, it makes great sense!

Veron -- I've been thinking of you and your test kitchen as I've written these posts. I think this is right up your alley as you have the mind of both a chef and a scientist!

Hi,
I have had the fortune to work side by side w/Heston Blumenthal as an invited scientist at the Fat Duck for several weeks. Nowadays, we collaborate via technology as I'm now based in the US. We have to be careful on how we name their (Ferran Adria, Pierre Gagnaire, Wylie Dufresne, Grant Achatz) as it is NOT molecular gastronomy. It is best known as research or science-based cooking. I'd love to share my experiences and manuscrips on the matter. please email me at c.vegamorales@gmail.com