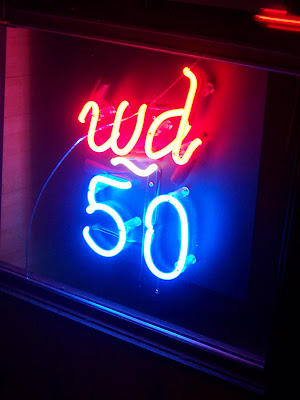 Transportation technology has nearly failed me (one stalled subway and a bellicose taxi driver) but I still managed to arrive at wd-50 on the Lower East Side of Manhattan for my 7 p.m. reservation. I am joined for this immersion in molecular gastronomy by my friend “Lee Sloan,” a Grande Dame of food and wine on the New York circuit.

One cannot be dubbed a “Grande Dame” without a certain level of experience and outspoken opinion, and Lee has all these qualities in abundance. I’ve taken a certain perverse delight in inviting Lee – a staunch traditionalist – to join me in this futuristic culinary voyage that could easily equate to a visit to Captain Kirk’s kitchen. This promises to be nothing like Grandma’s home cooking.

wd-50 on 50 Clinton Street in New York City has been given one star by the 2007 Michelin Restaurant Guide, which classifies the food as “Contemporary.” While the guide makes no mention of the term “molecular gastronomy” it does use precious words like “experimental” and acknowledges that it’s hard to know if Chef Wylie Dufresne “is a chef or a mad scientist.” Yet, wd-50 is generally thought to be the epicenter of the molecular gastronomy movement in New York.

Lee and I have come to get a better understanding of what this movement is all about. Is it food, art or science? Lee has located some data on the five basic tastes – bitter, salty, sour, sweet and umami. What is umami? It’s a Japanese world that means “savory” or “meaty” and means the ability to detect glutamates found in meats, cheeses and protein-rich foods. In 1908 this fifth taste was clearly identified My pre-dinner research has turned up some debate on the term molecular gastronomy. A group of ground-breaking chefs recently issued a joint statement in the London Observer that focused on embracing excellence and innovation as the key principles of their work. The statement, in fact, rejects the trendy term molecular gastronomy as a descriptor of their cooking. We’ll leave the debates on linguistics and terminology to others. Tonight, our taste buds will boldly go where they’ve never gone before.
The exterior of wd-50 is unassuming – weathered red brick, a large tinted picture window, and that quirky pairing of initials and digits in neon at the lower corner of the pane, oddly reminiscent of the symbols used in the periodic table of elements. Inside, it is sleek and modern, decorated in shades of slate, blue, light wood and stone. There is a glimpse of chrome in the open kitchen at the far end of the room.

We are seated and review the wine list. “Is the wine molecular, too?” Lee asks wickedly. We order glasses of bubbly cava and Lee begins to quiz our waiter – What is the food all about? What makes it different? He seems somewhat bemused by her questions, and admits that no one has ever really asked. Instantly he launches into the credo, “This is molecular gastronomy, and the kitchen is a chemistry lab. The tastes and textures of the food involve all your senses.”

That sounds good to us and we’re glad we’re all on the same page. “While you’re at it,” Lee asks, “can you take out all the calories?” The waiter chuckles at her request. Apparently there are some miracles even science can’t accomplish.

We strike up a conversation with the couple seated next to us. The gentleman, named Lew Shomer, is a true devotee of the movement, and he and his wife just returned two weeks ago from a visit to The Fat Duck in the United Kingdom. “We’re experimental,” he tells us. Lew explains the principles of molecular gastronomy, and how foods are transformed, liquefied and turned into foam and concentrated flavors to engage the senses. It’s a little like having our own interpreter. He’s even attempted the techniques at home. “We’ve fooled around with the foam,” he confides.

Lee and I study the menu carefully, trying to find the optimal range of space-age selections. “I really hope my taste buds are up to this,” I tell her.

The restaurant is now filled with an attractive and fashionable crowd. We select three appetizers to share and two entrees. A member of the wait staff brings us a rectangular box filled with sesame flatbread, parchment paper-thin and speckled with pale ivory seeds. The nutty flavor of the sesame is intense and the flatbread crackles at the touch.

Our appetizers have been chosen for maximum variety. Corned duck, rye crisp, purple mustard, horseradish cream is split between us. Strips of duck sliced like bacon are rolled and stacked on a crisp cracker base, with a dollop of mustard and cream at the center. Lee takes her first bite and looks deep in thought. The horseradish is sweet and biting at once and the duck is smooth and rich. “I taste different things,” she says as she contemplates the flavors. “There are different sensations depending on where the food hits the tongue. This really does work.”

Lew gives us each a taste of his hangar tartar with the addictive, deep aroma of beef dressed with béarnaise ice cream. We sample slow poached egg, chorizo, pickled beets, dried black olives, and foie gras, mole lentils, quince yogurt. It’s not an excessive amount of food, but each flavor is intense, and the familiar is transformed or re-engineered. All of the action and satisfaction is olfactory and taste-oriented. The dust of dried black olives offers a concentrated mouthful of brine. Chorizo is presented as a savory liquid reduction. Tiny pinpoint-sized lentils pop like pasta. Foie gras is as soft as feathery custard.

“It must be fewer calories,” I tell Lee. “The servings are smaller.”

She laughs out loud. “As my mother used to say, from your mouth to God’s ears!”

The technique of eating reminds me of a wine tasting exercise. We each take a bite, roll it on our tongue and immediately experience a chorus of staccato flavors and sensations. It’s not about eating to satisfy the stomach, but to make the tongue come alive. Bland, it certainly is not.

Parsnip tart, quinoa, hazelnuts, bok choy is actually an artistic composition of brambles and grains. Crispy shreds of parsnip taste like they’ve been roasted over an open flame, and the quinoa has the sweet taste of summer fruit.

“This defies definition,” says Lee. “Your satisfaction is stimulated by something completely different. It’s about body, mind, spirit and palate, of course.” Indeed, the five basic tastes are dancing as fast as they can.

The dessert plates are perhaps the most thrilling in flavor and visual appeal. Each resembles a three-dimensional Salvador Dali dreamscape. Yogurt parfait, pine, apple, pineapple, is a field of snow white, with logs of tangy yogurt decorated with spun gold. White chocolate cream, black sesame, argan oil, carrot is a Halloween color scheme of deep orange, black and white. The quenelles of carrot ice cream are velvety deep essence of carrot and supple white marble-sized marshmallows are like puffy clouds.

We pay the check, and the beverage manager Glen Goodwin graciously allows us to visit the kitchen. There are no beakers, lab coats, or pocket protectors – just a battalion of young culinary professionals working at an efficient clip. The kitchen is orderly and immaculate. There are chrome fixtures and a European-style stove in the center of the room. The kitchen is laid out scientifically, with hot foods prepared at the back, and cold foods and desserts prepared at the front near the dining area.

As we talk with Goodwin, our insight begins to catch up with the sensory experience we’ve just had. Goodwin explains that this style of cooking comes from chefs who “ask why too much.” He describes culinary professionals that are intensely curious. Here, the kitchen is a collaborative place where ideas incubate and come to life. Anyone can suggest the idea or hypothesis for a dish, and they keep trying it out until they get it right. Goodwin says this is a breed of classically trained chefs who have made the cassoulet a hundred times, and “now they want to try and make the cassoulet with pine nuts.”

In the taxi returning to midtown, Lee and I try to deconstruct the formula for molecular gastronomy – flavor, texture, color, matter, animal, vegetable, mineral and a little molecular action. Is it science? Is it art? Is it culinary avant-garde? We settle on revolutionary and unexpected with a stunning injection of physiology, psychology and imagination puréed, dissolved and freeze dried to perfection.

Fascinating stuff! I think I watched a documentary yesterday on the ultimate molecular gastronomy restaurant, El Bulli in Spain. Anthony Bourdain spent five hours eating 32 courses all of the most amazing structure, taste and ingenuity. It's one of my places to eat before I die.
Incidentally, the Fat Duck is Blumenthals restaurant (I mentioned him in my last comment regarding this subject). Another Before I die place. If you do happen to decide to visit El Bulli, could I tag along?

Freya and Paul - I was thinking of you when Lew mentioned the Fat Duck - thought it was fascinating that we'd sat next to someone who had been there, and you'd just brought it up, so I sounded very knowledgeable when he mentioned it! Sounds like we'll have to plan a trip to El Bulli!

WD-50 is such a great name and after reading your post I so want to visit this place.

Ari, It is an adventure, like nothing I've ever experienced before. The chef really makes you become more aware of the senses you use when eating.

Great Post! This is such an interesting concept~ and really makes sense.
I don't see the science of molecular gastronomy making it to the deep south for a while. I don't think fried green tomatoes would make the cut.

Sandi, I think there's a touch of science, along with the romance that makes those fried green tomatoes taste so good! The perfect match!

Hi t.w.
I have not been particularly tempted by molecular gastronomy - not that I am not adventurous, I really dont know why I have not been tempted - until I read this post. You must be a decent writer then, Huh?

TOF - I very much appreciate the compliment! I would say that originally I approached molecular gastronomy much the same, but I think if you try it, you'll find it quite a sensory adventure. Let me know if you do and what you think!

I smiled when I read "umami." Every since reading a fantastic article about it in The New Yorker last year, I jokingly (and occasionally seriously) use it all the time with Jeff. It's so much fun to say.
And this post was fun to read. You may not have rainbow carrots, but you've got WD-50. Should we call it even? ;)

Susan - "umami" sounds like a good name for a restaurant specializing in molecular gastronomy! I'm surprised wd-50 hasn't come up with it's own version of rainbow carrots, so I'm still going to hold out for yours!

I have not been here, but will add it to my list. How fortunate you were there to share all this info-very useful,thanks.....cheers!

I thought I commented on this before but I guess not. I am pretty curious about molecular gastronomy. I'm keeping an open mind about it. I love your last paragraph; a very witty summary of your findings. :)

Veron, I was amazed at how the whole concept challenged every one of our senses. It really made me think differently about eating. Don't rush! -- There's an experience to be had! Hope your experiments are going well!