The Absolute Greek Truck and a Mediterranean Holiday 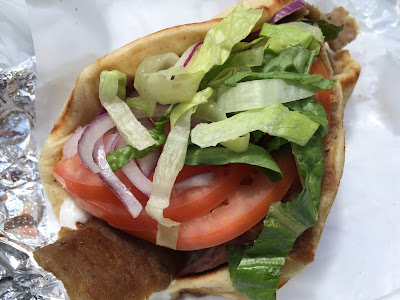 Zany is forced to briefly postpone our next food truck adventure as she must attend an urgent lunch meeting that serves a sorry selection of ham and cheese wraps.  I’m not even going to try and make sense of that.

However, the postponement is fortuitous as Zeus spends most of the day hurling lightning bolts at the island of Manhattan.  The subsequent day is brilliant and serene and the sky is azure blue.  It is perfect food trucking weather.

After emerging from a little morning playtime in Central Park, I do some early recon on Sixth Avenue.  At 52nd Street I get a make on what appears to be a brand new entry to the food truck scene, the Absolute Greek Truck. 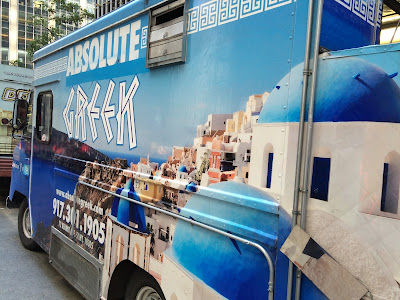 The truck exterior is decorated with a sweeping panorama of an ancient Greek village overlooking a cerulean ocean.  It’s just tempting me to throw convention to the wind and embark on a Mediterranean holiday.

I’m not sure what “Absolute” Greek really refers to. Is that unbending, or despotic?  Is it “absolutely awesome?” The owners bill the truck as “a taste of Hellos on Wheels.” At least “the Greek” is not indifferent. Seems like the perfect choice for lunch, so I send Zany a screen shot of the menu. 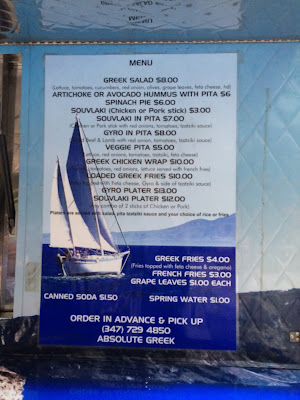 She texts back, “You had me at “loaded Greek fries.” Done deal.

The lunch hour approaches.   New advances in technology allow me to know exactly when Zany is arriving on the scene: 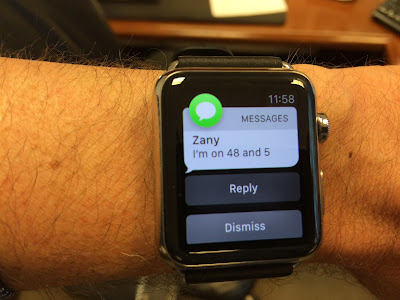 We meet at the outdoor plaza on 52nd and Sixth Avenue where the Absolute Greek Truck is attracting a hungry crowd. Zany strolls into the plaza wearing stylish Jackie O sunglasses and I note that her bag perfectly matches the truck’s Mediterranean seascape. 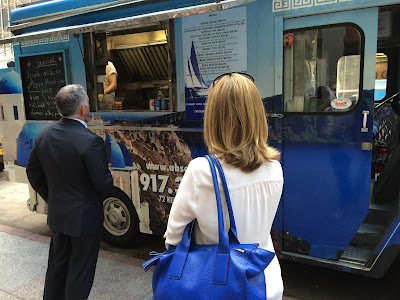 This gig in the beauty business has made her quite the fashion forward food trucker. A few more food truck lunches, and I’m likely to resemble Aristotle Onassis. 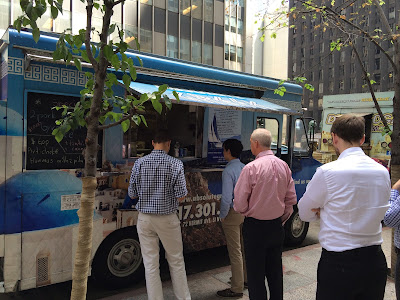 We line up and debate the menu.  There are a variety of pork and chicken options, but Zany is going for authenticity.

“If we’re going to do Greek, we have to have lamb,” she insists.  We settle on a spread that could feed a team of Olympic athletes, including stuffed grape leaves, Gyro in Pita stuffed with beef and lamb, red onion, tomatoes and tzatziki sauce, Greek fries topped with feta cheese and oregano and “Souvlaki,” which is chicken on a stick.

Now, where to dine?  There are several outdoor plazas in the area, but I’ve got a different idea.

“This picnic can only be enjoyed on the shore of the Mediterranean,” I declare.

Now, the Mediterranean Ocean is a little far to go for lunch, but thank Poseidon, we do find a reasonable facsimile just two blocks away. 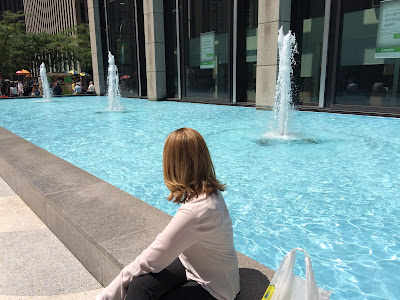 Our ocean is a sparkling azure blue, and there’s plenty of room for Ari to dock his yacht Christina O.

The Greek god Helios is working overtime and the sun is blazingly hot.  Zany unpacks our picnic.  “It’s Greek tapas by the sea,” she remarks. 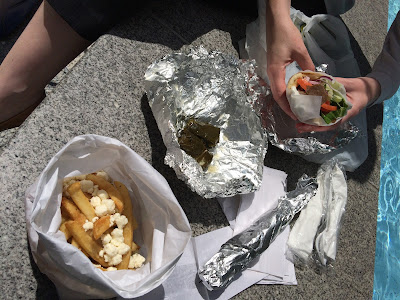 The cigar-shaped stuffed grape leaves serve as our appetizer. The rice filling is tangy and pungent. 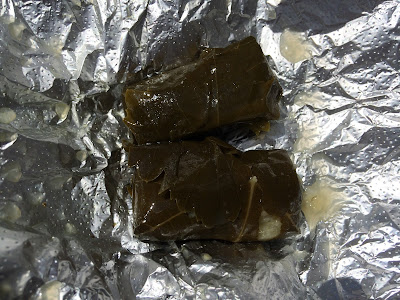 The Greek fries come in a simply elegant white paper bag with a liberal sprinkling of feta cheese.  Feta doesn’t melt all that well on fries, so we quickly adopt a highly effective technique of scooping up two fries at a time with some feta sandwiched in between. 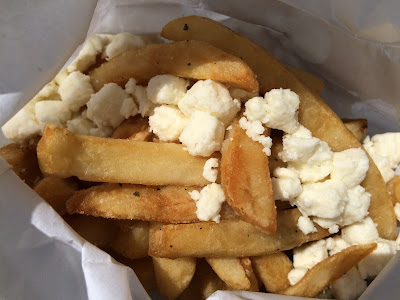 The chicken Souvlaki is nicely browned and seasoned.  I reach for a fork to slide a chicken cube off the skewer and she stops me.  “You nearly violated the cardinal rule of food trucking,” Zany exclaims.  “No utensils!” 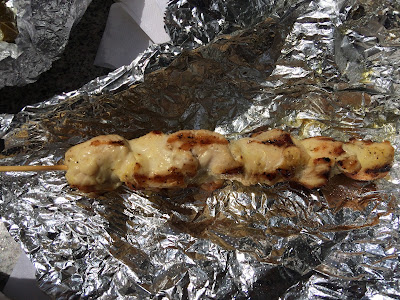 I’ve gotten sloppy.  I forget I’m dining with a pro. 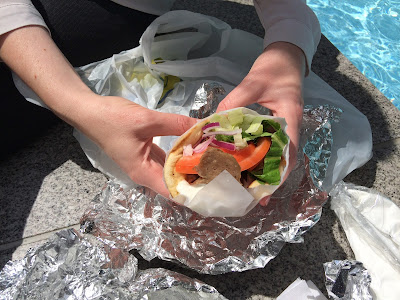 The Gyro is massive, but Zany still manages to deftly divide it in two.  She takes a bite and gives a satisfied murmur.  “That lamb tastes like it’s been slow cooking since this morning,” she says.  The red onion, and cool tomatoes add a nice contrast, and soon I find that my fingers are covered with tzatziki.

For a while, as we digest our meal, we sun ourselves by the shore, and then I suggest that such a feast can only be topped off with a dollop of Greek yogurt.  Zany whips out her phone and locates Uptown Swirl on 7th Avenue, where they feature a self-serve dispenser and a decadent selection of toppings.   We find the closest thing that resembles Greek yogurt … 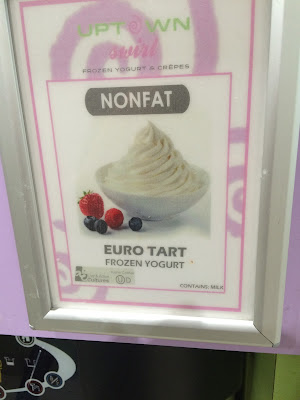 But, our pumping and swirling skills leave something to be desired. 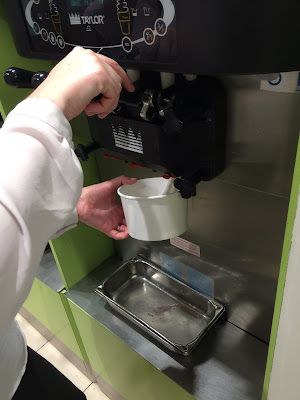 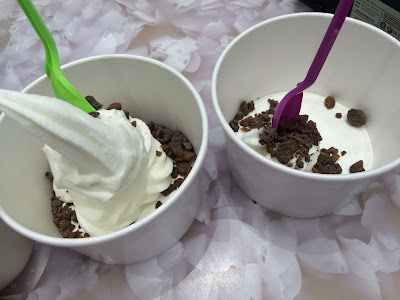 We walk leisurely back up 7th Avenue, and when I suggest we hurry and cross before the light changes, Zany chides me saying, “You’re making me work too hard on our Greek vacation.”

Later that afternoon Zany texts, “I think I may have gotten a mild Mediterranean sunburn…worth it.”

OMG I love it. Zany is dressed to kill with the fabulous bag that just happens to match the truck and she's going to eat messy Greek lamb food? What a gal! And I love your comment about your eating a few more food lunches and likely to resemble Aristotle Onassis. I was wondering where you two put all of that food :)
Sam