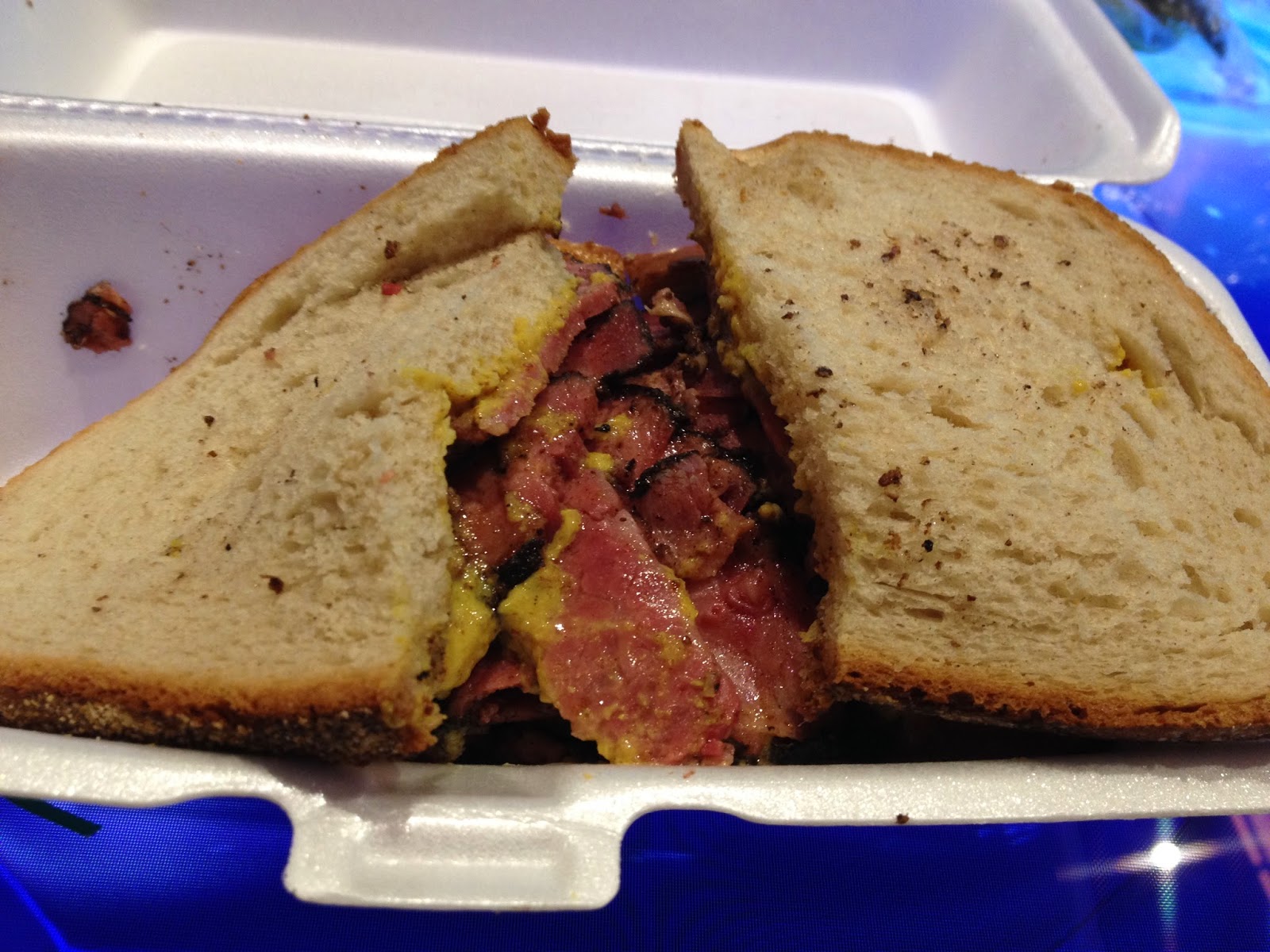 It’s been so cold that food trucking has been prohibitive. So it’s been quite some time since my college roommate Ford McKenzie and I stepped out for a noontime bite to eat.

Then, out of the blue, he suggests we grab lunch. I suspect he is secretly jealous of my BFF Amanda and the fan base she has built as a recurring guest star on “Culinary Types.”  Personally, I’m not choosy – the more scintillating sidekicks the bigger, as long as they’re entertaining. 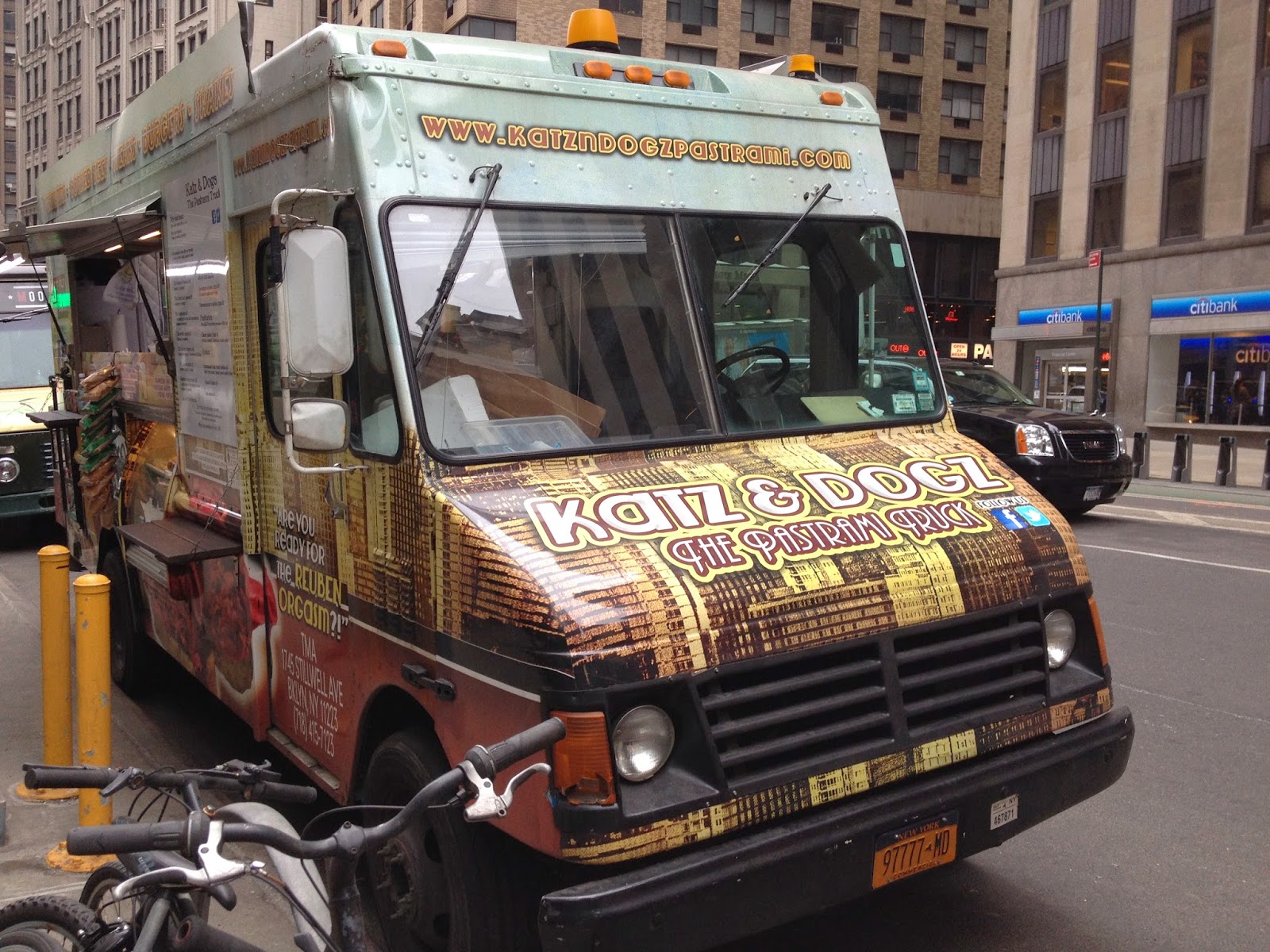 Ford pings me that morning for lunch details. I suggest the new deli truck “Katz and Dogz” which I spot that morning parked on 55th and Broadway.  It promises a Jewish deli on the streets of New York.

“What hotels are in the area?” Ford asks. Please note, that it is now just assumed that when we get truck food we are going to a hotel lobby to dine.  I offer a few suggestions that Ford summarily dismisses as too small or not hip enough.  I should know better than to take on the fine dining aspect of the lunch adventure.

Ford and I rendezvous at 55th Street and Broadway shortly after noon. While I have assumed that Katz and Dogz is affiliated with the famous Katz Deli of New York, Ford informs me that this is not the case at all and the K&D team is actually Brooklyn-based. “So much for truth in advertising,” Ford remarks. 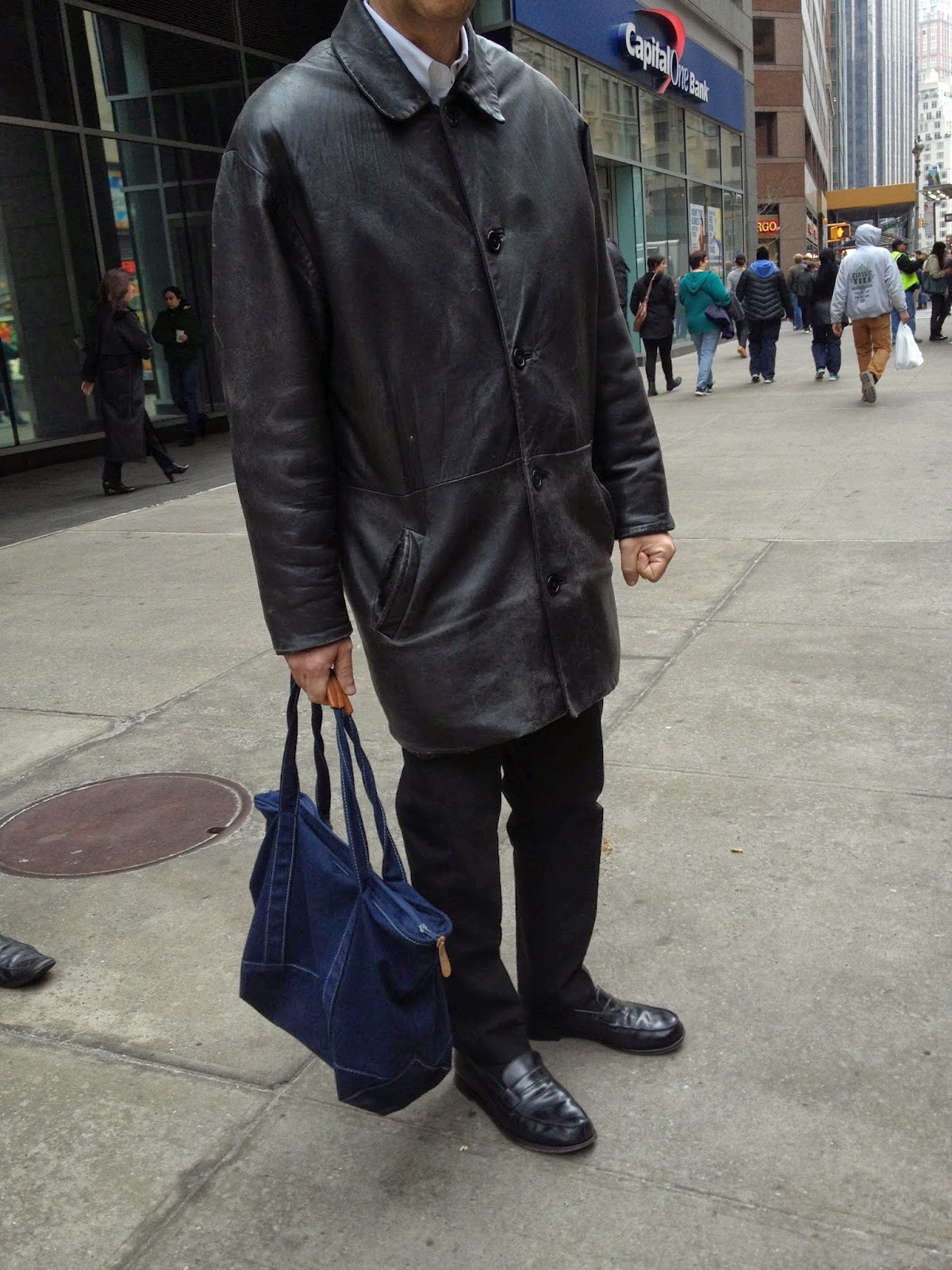 Now to the food.  Katz and Dogz promises a dining experience that will rock your world. 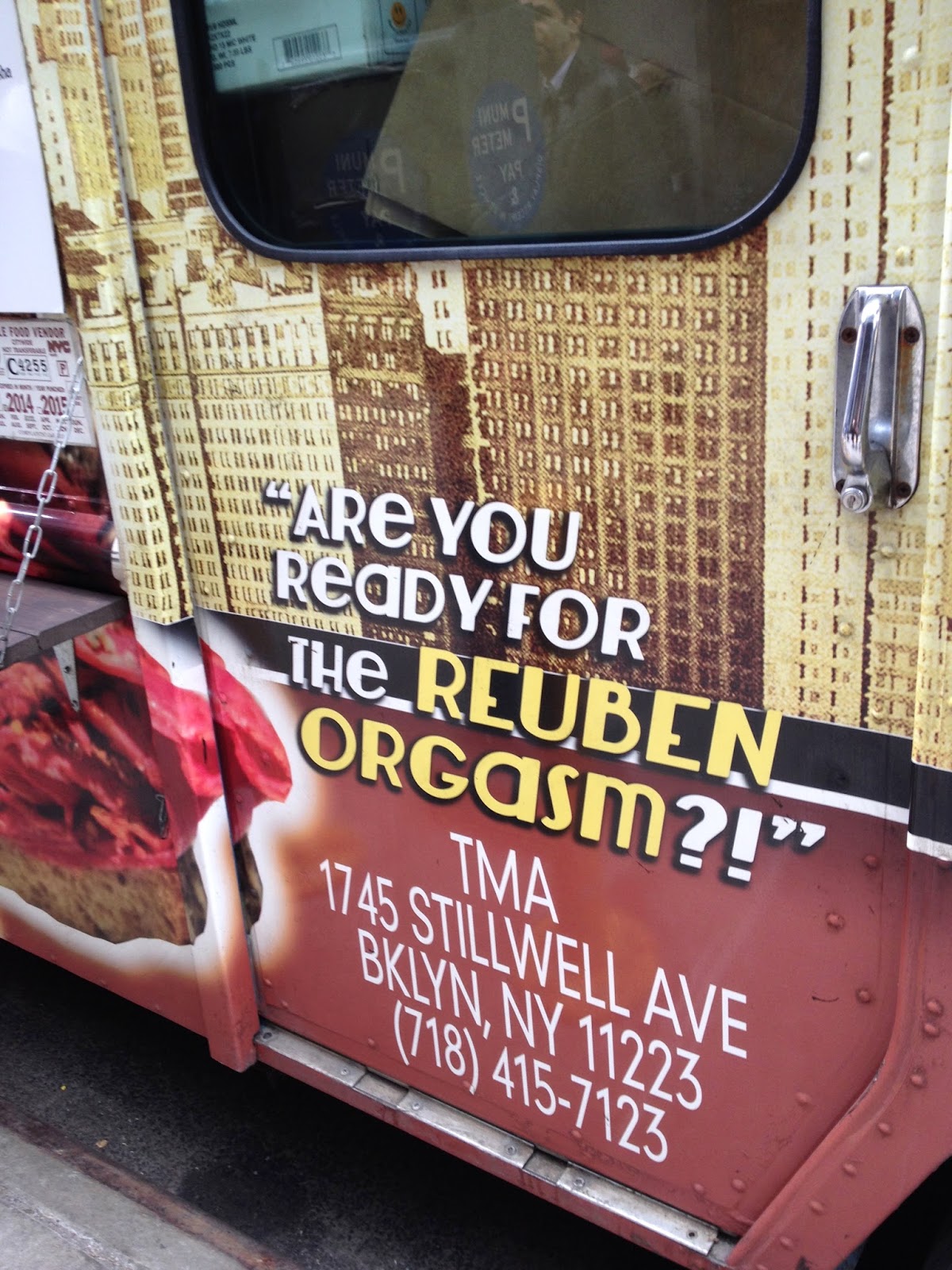 We queue up to place our order.  I notice that one member of the K&D team is slicing pastrami paper-thin using one of those circular meat grinders.  If not for the automobile fumes, it would really feel like a deli. Ford orders the Pastrami Paradise on Rye with Mustard and a side of macaroni salad. I order the Rueben Orgasm with Russian dressing on Rye (which sounds way too racy for lunch) with a side of potato salad. 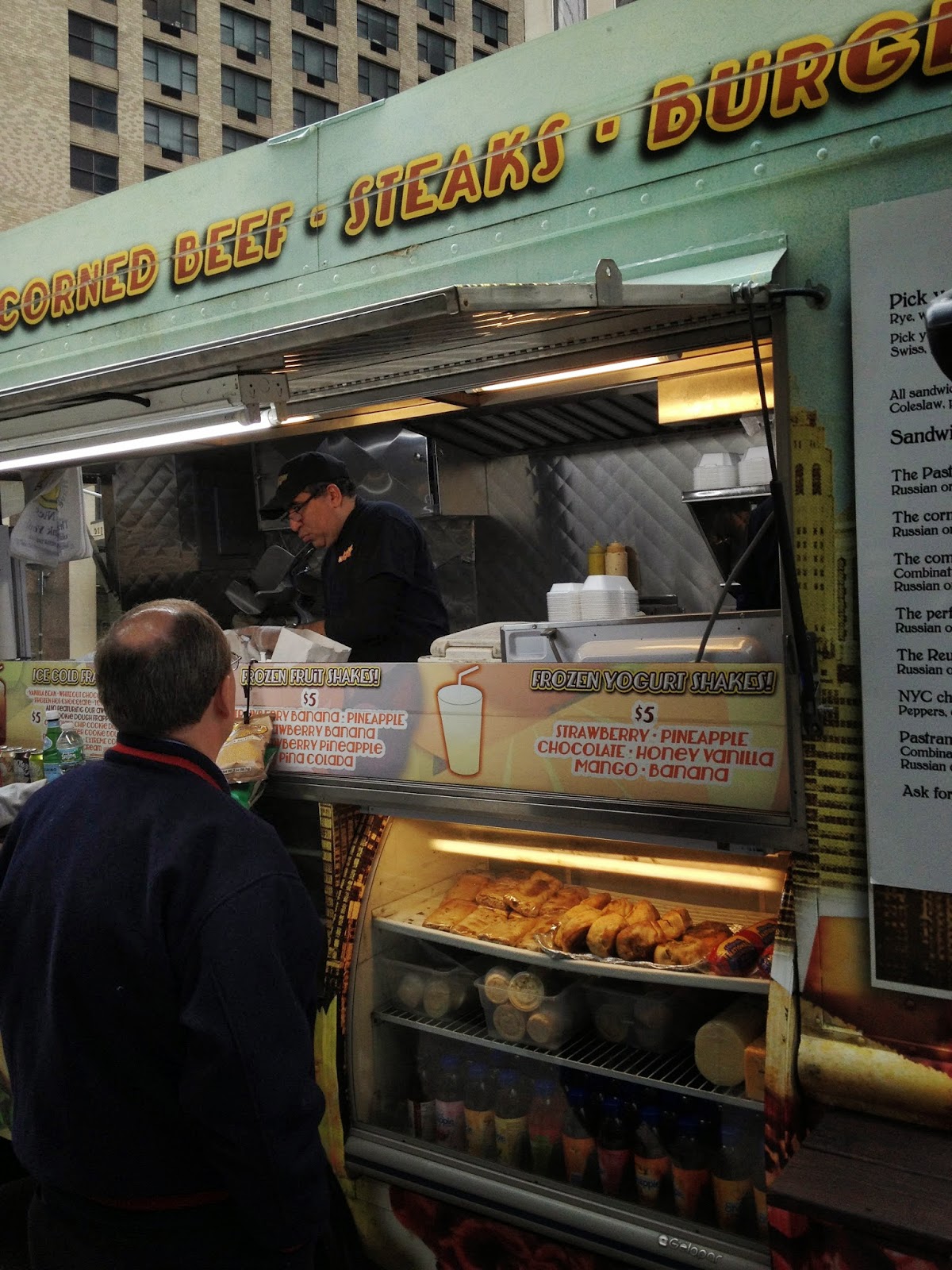 Ford has come prepared for a covert dining operation.  This is the first time we’ve lunched on the west side and he’s a little uncertain of the landscape.  Will we get easy access to lobby dining, or will west side hotel security be more stringent?  So, all of the food gets concealed in a canvas bag allowing us stealth entry to the hotel of our choice. 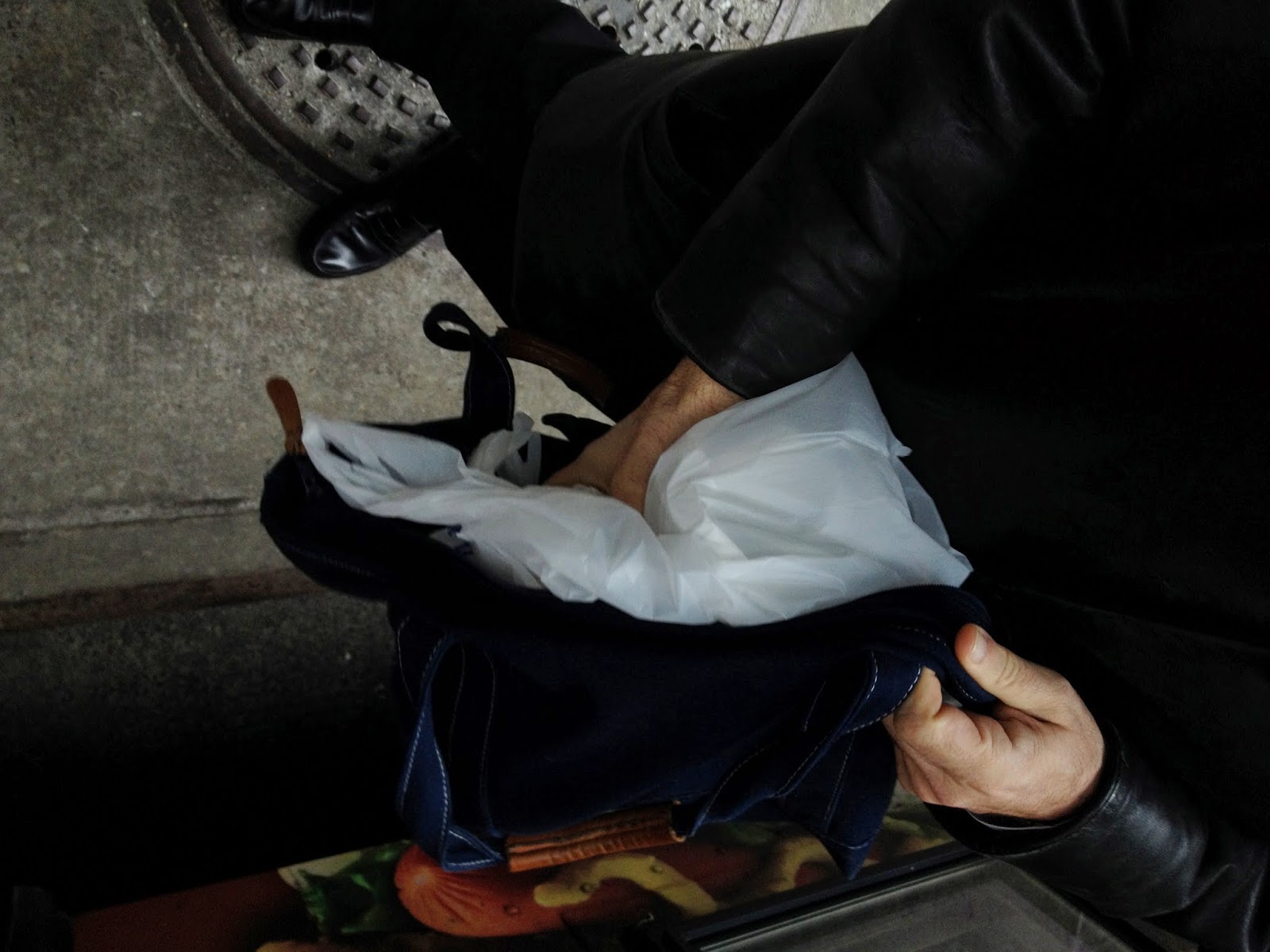 “The Novotel in Times Square has a view,” he adds with a glint in his eye.

“I had a feeling,” Ford says and we are on our way. 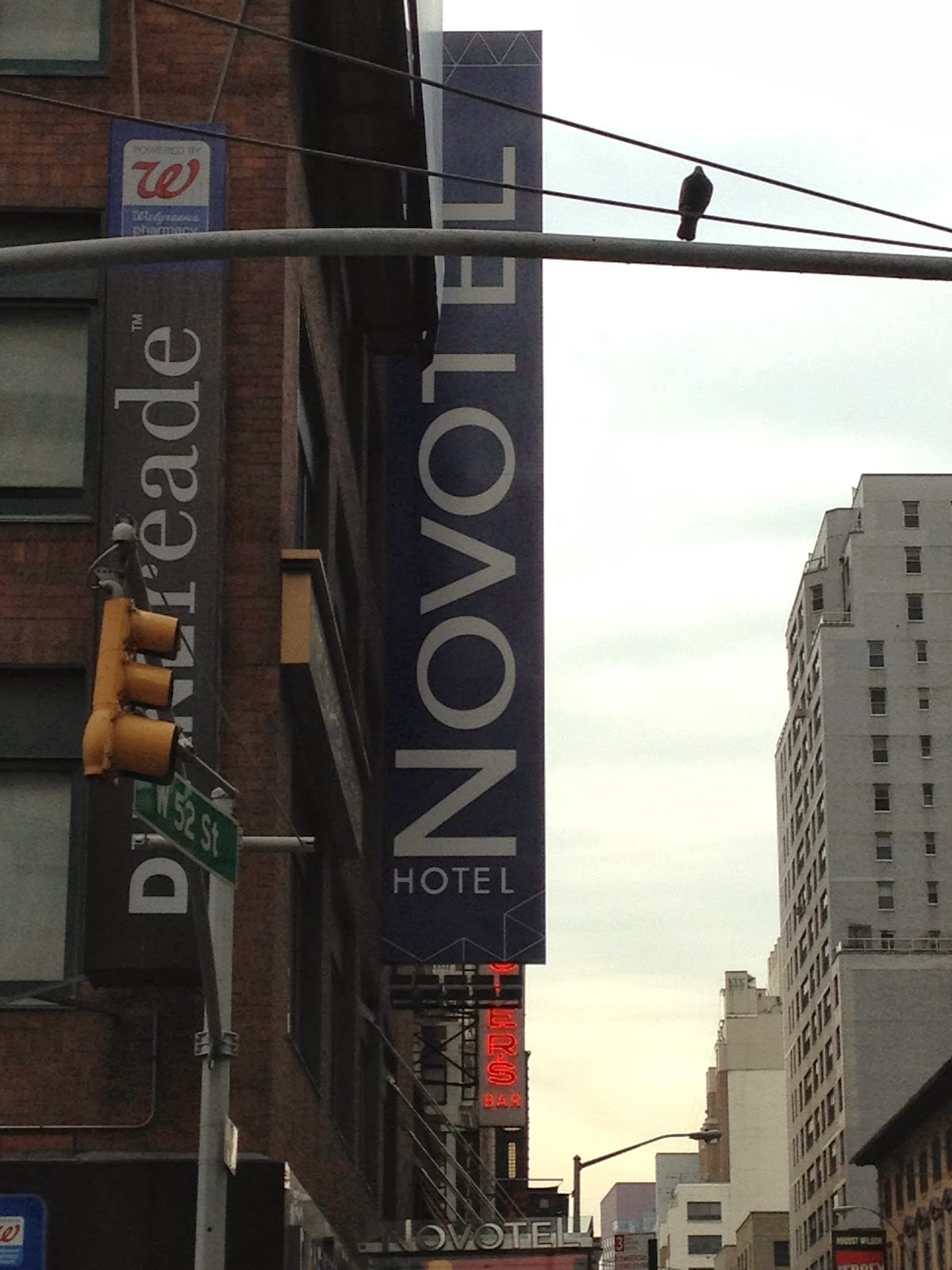 The Novotel on 52nd just off of Broadway has recently been remodeled, and is promoting itself as a Four Star hotel.  It sounds like just the right spot for a pastrami lunch.  We enter on the street level undetected.  There is just a bellman’s desk and whole bunch of luggage cluttering the immediate area.  I try to look inconspicuous but I’m wondering if the bellman can detect a hint of pastrami as we breeze past.

The lobby is actually on the 5th floor, proof that lobbies are no longer at street level and you can’t count on anything anymore. No underachiever, the lobby bar is called “Supernova.” 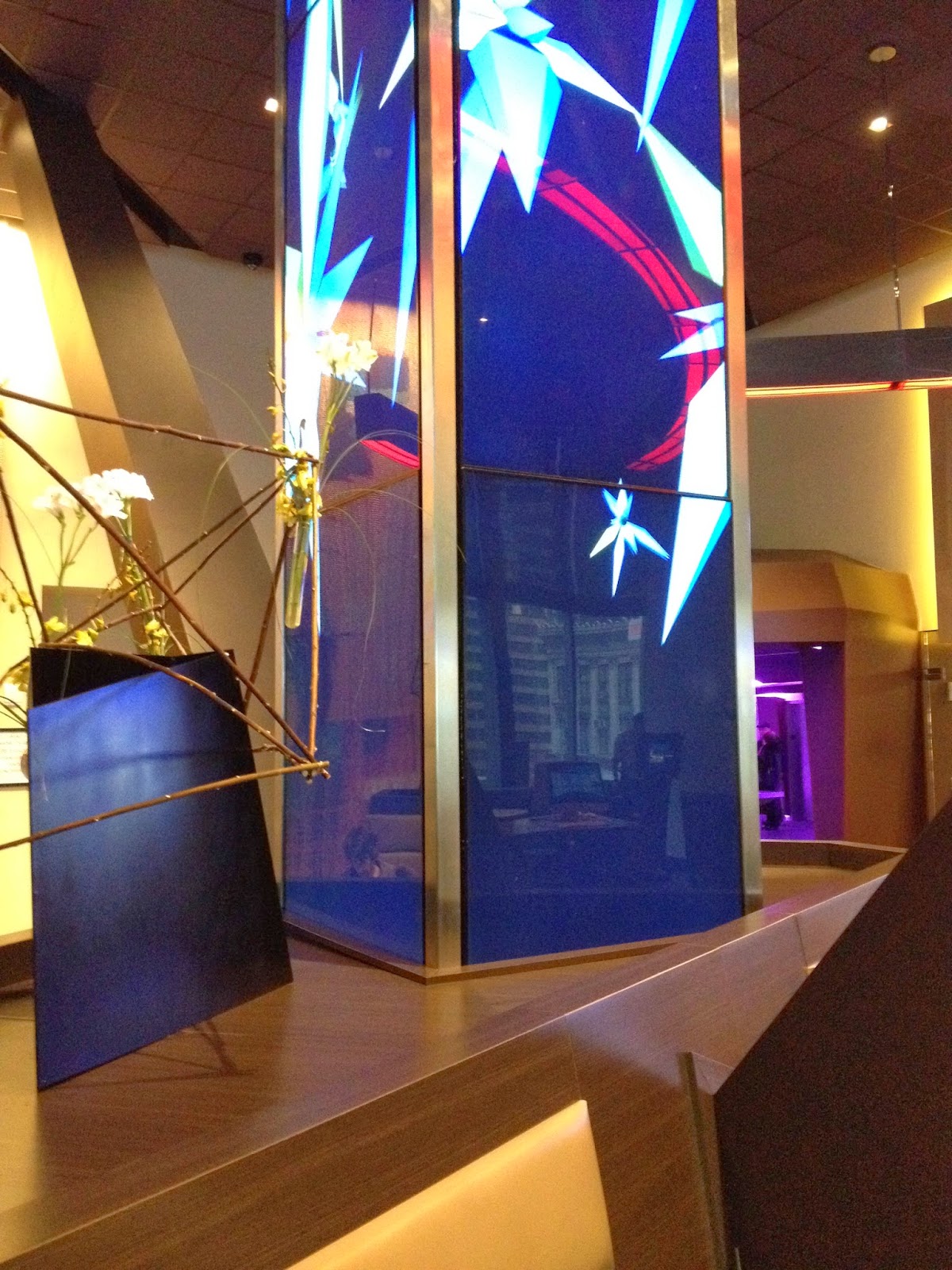 It is a stunning, high tech environment dotted with computers and tables that simulate the effect of ocean waves. Very scenic and somewhat overstimulating.  Note how the computerized water pools around the lunch sack. 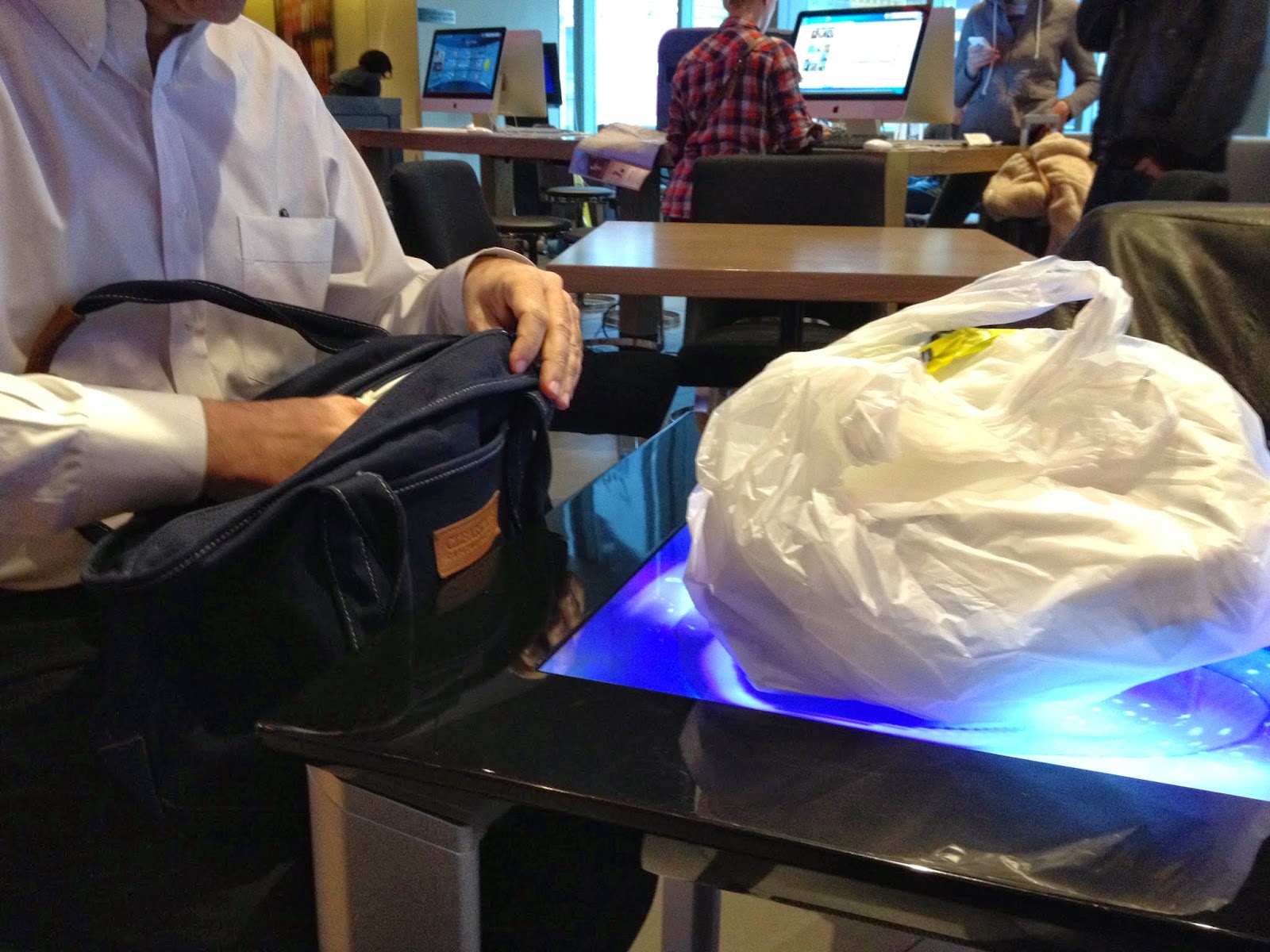 I notice that there’s even a soundtrack. We are on Broadway after all. The ambiance is punctuated with a peppy selection of show tunes, jazz and reggae.

Ford removes the pastrami and corned beef contraband from the lunch sacks. The pastrami is sublime – silky, and perfectly spiced without a hint of grease.   Within moments, it has vanished. 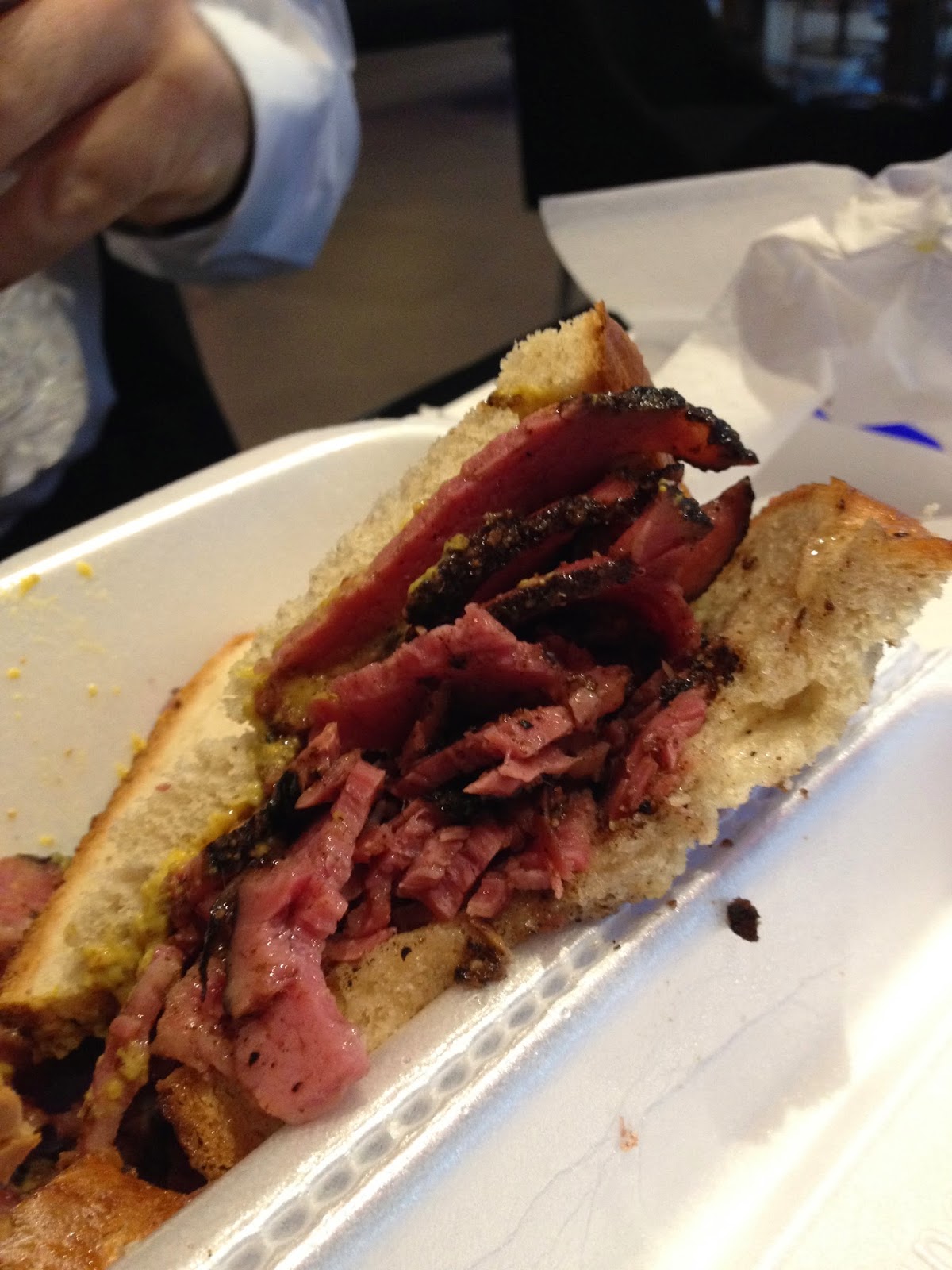 I’m really not sure how to assess or describe the orgasmic qualities of a Reuben Sandwich. I probably need to spend more time in Times Square.  However, I can tell you that it is quite tasty, and the Swiss cheese and sauerkraut adds a nutty, piquant touch to the Dagwood-sized sandwich. 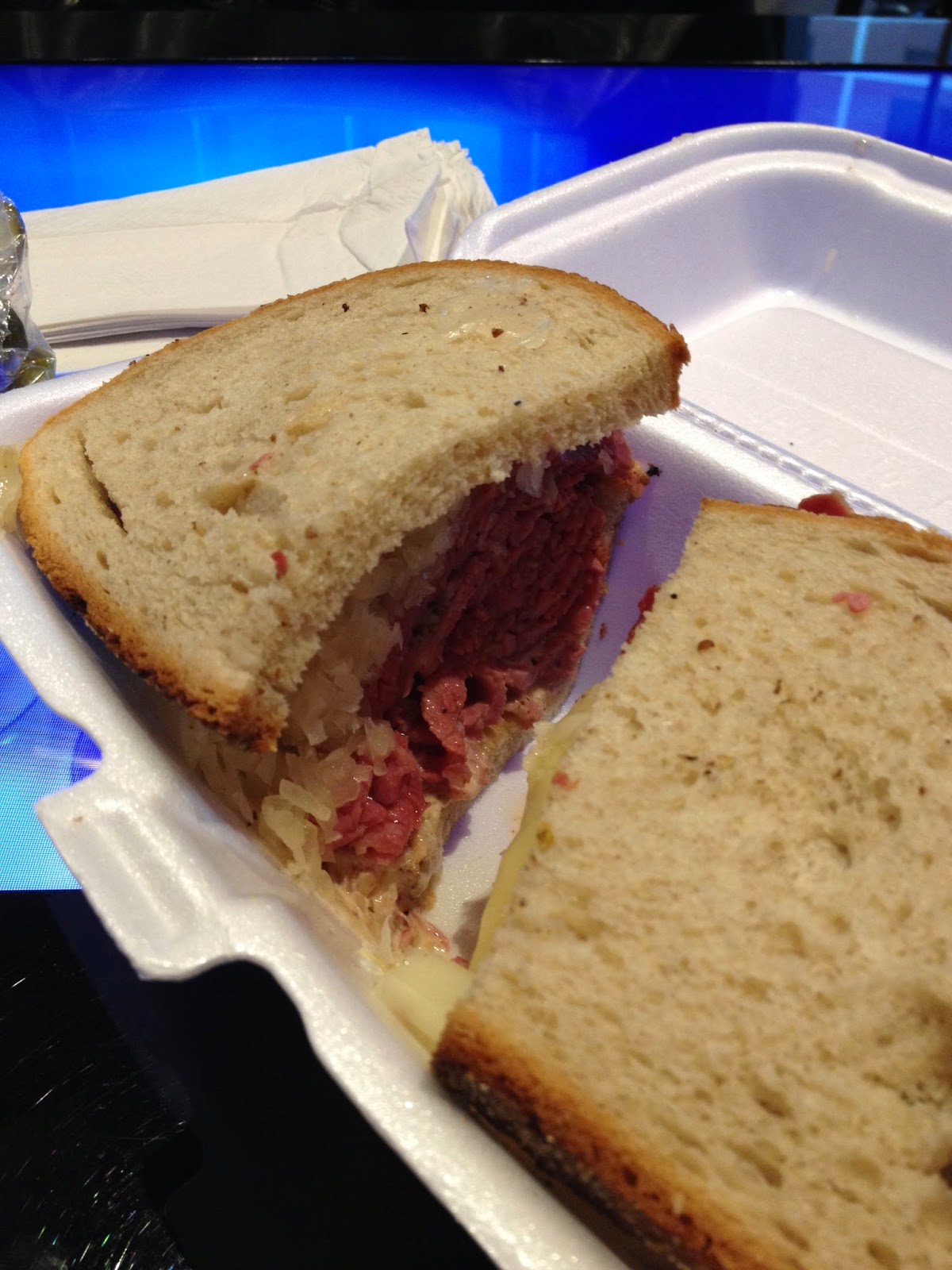 The side salads are less than impressive, but the massive sandwiches overshadow any disappointment there. It looks like a lot of food, but within minutes, we seem to have inhaled it all. We’re growing boys, I guess.

With our ocean wave tabletop cleared of all food, the only thing we haven’t done is checked out the view from the wrap-around outdoor balcony. 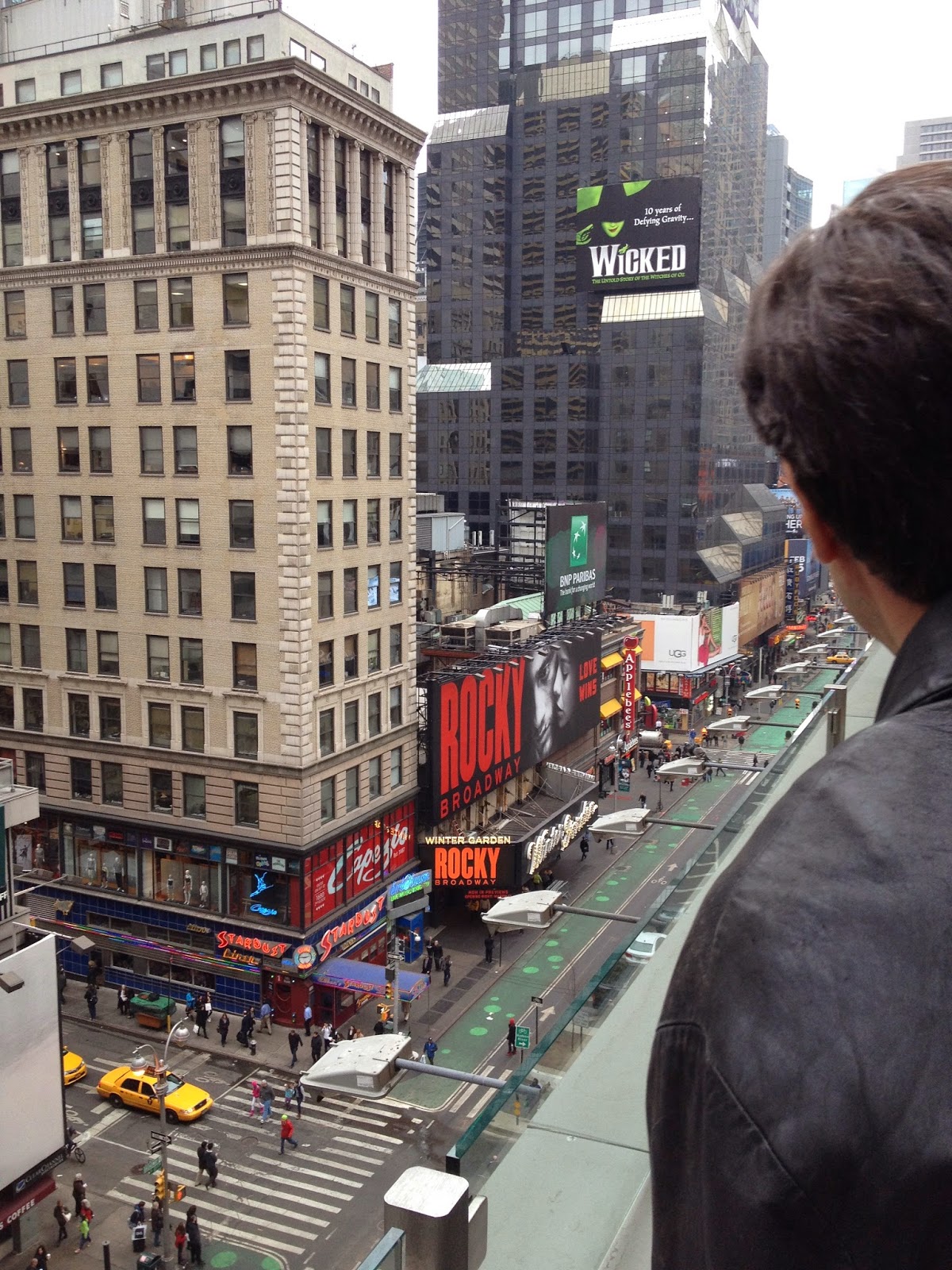 If the Reuben is orgasmic, the view from the Novotel is indeed thrilling, offering a sweeping view of the best of the Great White Way. 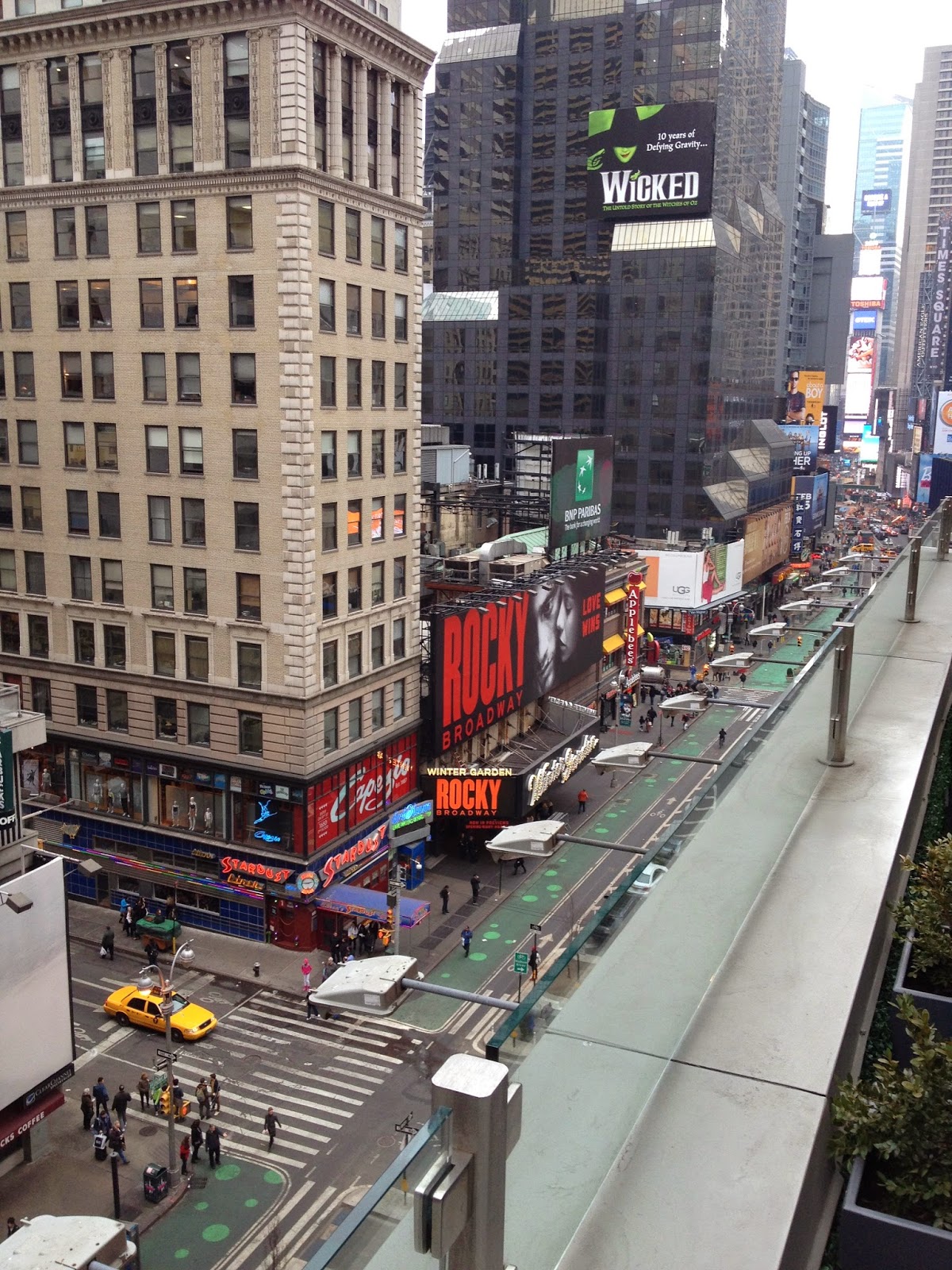 As Ford and I part ways, I return to work defying gravity and humming the theme from “Rocky.”

Late that night, I am scanning the news headlines online and come across a classic David and Goliath smack down. That afternoon, perhaps as we were gorging ourselves on pastrami and corned beef, Katz’s Delicatessen slapped the Katz and Dogz food truck with a lawsuit, claiming the food truck is making money off the deli’s brand without permission.

I forward the NY Post article to Ford.   He responds with his typical brand of understatement. “Legal or not, it was mighty good pastrami.” 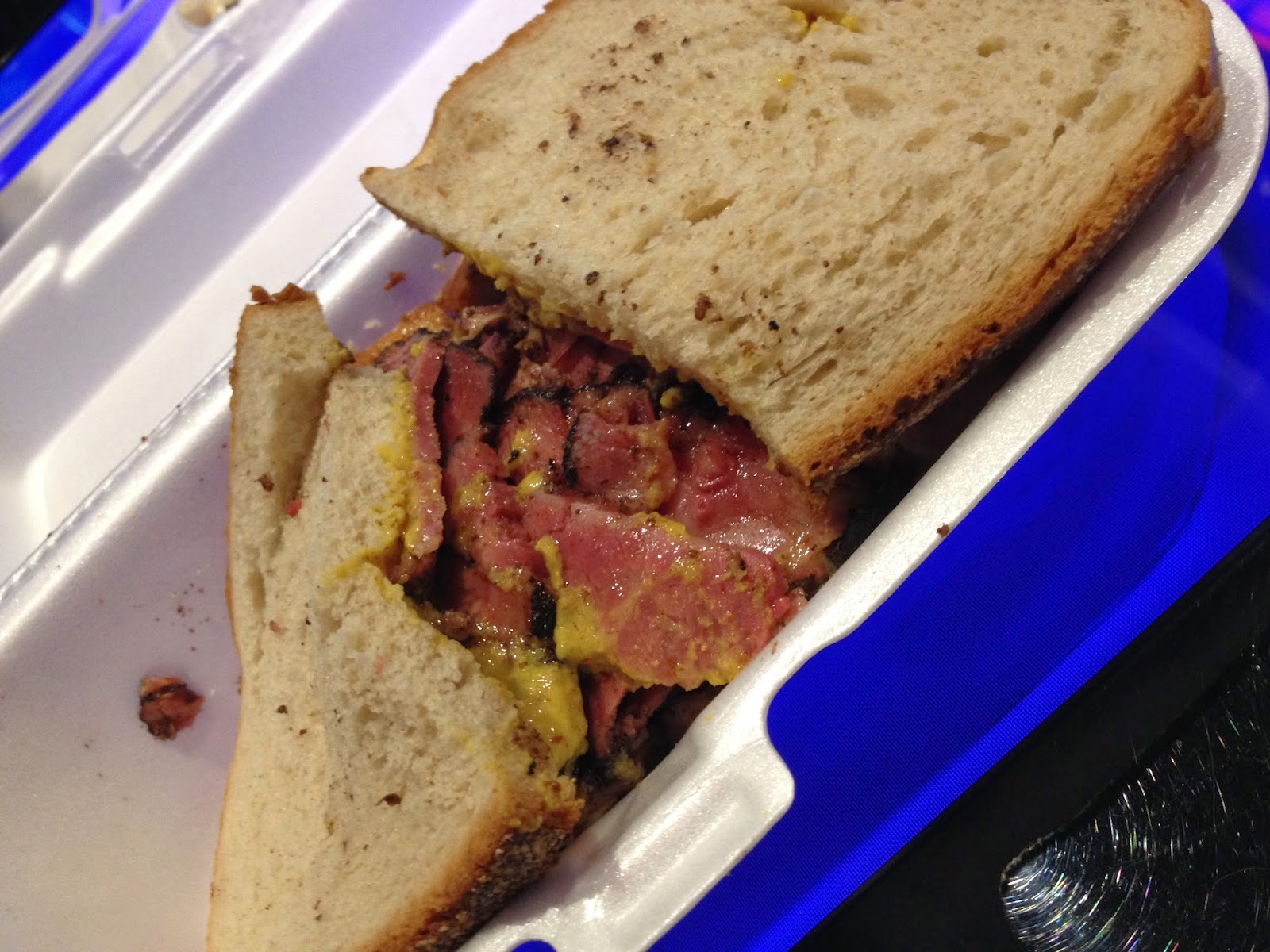 Another fun adventure with Ford and the food trucks. The minute I saw his picture I noticed the bag. Has he always brought along a lunch bag or is this new? What a great idea and very helpful to aid your entry into the lobby. You guys certainly went first class this time with the impressive views and the gigantic sandwiches. I'm not surprised that Katz isn't pleased with the name. But now you can say you knew them when. Enjoy your weekend TW.
Sam

Sam, After walking into the Waldor carrying three pizza boxes, you would think Ford would have no shame at all. But, he said he hadn't sufficiently cased the west side hotels and wanted to be prepared. He's a regular Boy Scout.

I did wonder whether the truck was run by Katz's. Will keep an eye out for the outcome of that.

So, do you still get that twinge of nerves when you go into the hotels? And if so, is that because you know it is wrong...both from a hotel policy perspective, but also the unwritten rules of foodtrucking??

Zany, while I'm not a lawyer, I can tell you that hotel lobbies -- in general -- are considered public spaces. It's that little bit of real estate the hotels give back to the hungry community. Now, technically, is the 5th floor really a lobby, and therefore is it really public space? Ford is really the expert. As for the unwritten rules of food trucking, perhaps you'll be able to battle that out with Ford next time you're in NYC...

I must admit, I got a twinge of excitement at the thought of Katz plowing around New York City in a food truck. I can understand them not being thrilled about their name on the side of a truck when it isn't them.

That said, you two really are testing the limits with those unbelievable sandwiches. I'm sure there were whiffs tantalizing hotel guests:) My mind is playing tricks on me because I'm getting the scent all the way in PA, lol...

I think you should both go back to the 5th floor on another lunch excursion but next time, take those sandwiches to the balcony and munch away as you watch the city go by. Thanks for sharing, T.W. You do know I am now craving a Pastrami sandwich from Katz!

34 years in New York and I'd never eaten "street meat." Until last week, when I had a Katz and Dawgs frankfurter. Delish.

I actually thought Katz deli had was courting around town with some new wheels! I was curious if Katz Deli had an issue. so happy Ford is back and those sandwiches looked mighty tasty!

It's one of my favorite pleasures, reading of your food truck adventures. I met the owner of one and was so impressed by his drive to make great food... something he couldn't do in a brick and mortar store for all the expense...bravo for the little guys who work so hard to do this for us all..

I love this post and the food look AMAZING! and you always make me laugh!!xx

The lobby's on the 5th floor? Fascinating. A view, yes. Good for bar traffic.....and.....your food truck adventures.
The sandwiches look great...the owners were pressing their luck with the name, however. Keep us posted on the results of the lawsuit.

What a catchy phrase. Haha the foods sounds amazing though. Wow I could really go for some food truck food. What a day you boys had! Foodie Adventures are the best kind.

Another great foodie place for you all to try!

Thanks for the great tasty review! :)

I loved this post & the view from above must have been cool too!