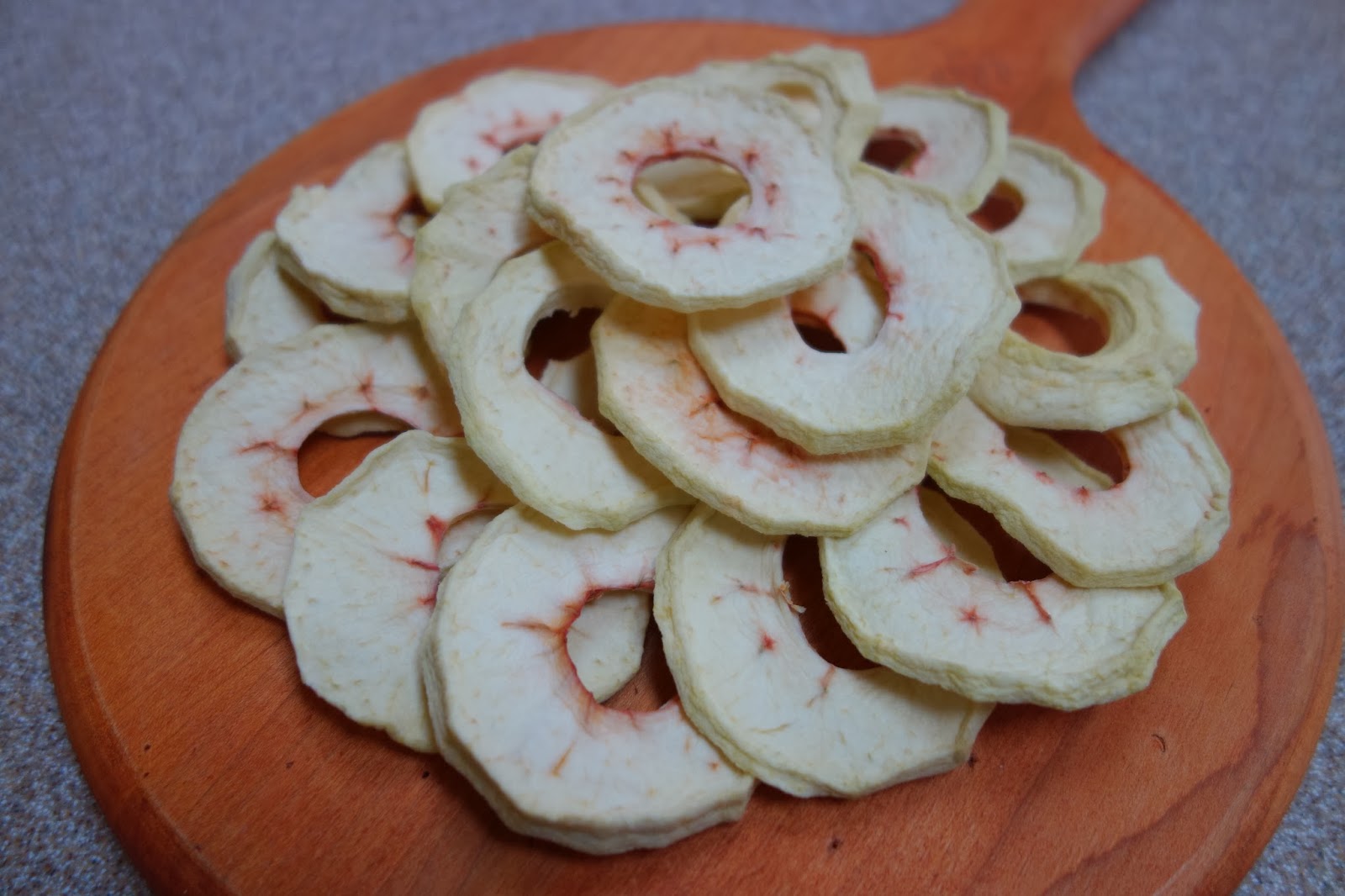 No, I’m not talking about my skin, although the Polar Vortex has certainly caused a lot of drying and flaking. At the moment, I bear a striking resemblance to a lizard.

Actually, this is about one of the oldest techniques for preserving food. I’d never thought about dehydrating, but while working on an upcoming story for Edible Long Island, I was talking with Chef Philippe Corbet and Chef James Orlandi, co-owners of Roots Bistro Gourmand in West Islip about New Age gastronomy techniques. We chatted about sous vide, and I mentioned dehydration.“That’s been around for years,” said Chef Corbet, “but people should be using it more.”

Corbet is right.  Dehydration is an age old – in fact, ancient – technique for preserving food.  My first memories of dried food are tied to camping trips and the moon shots. I start to do a little research, and I soon learned that I could be looking at a technique that might help me preserve more of the harvest from Restoration Farm.

I’ll be honest.  My track record as a CSA member is pitiful.  While I cook a lot of vegetables, and consume much raw, I’m often not on top of the huge amount of food I bring home.  I’m ashamed to admit that a certain percentage goes to waste. So I’ve been spending the cruel, cold winter researching ways to preserve more. Canning is one option that I’ve gotten quite good at, and the conversation with Corbet and Orlandi pushes me towards a little experiment in dehydration.  Who knew there were home appliances that could tackle this challenge?

Now, some will ask if I really, really, really need another home appliance for the kitchen? Let’s face it – it’s my art, and kitchen appliances are my paint brushes. So, in a nanosecond, I have purchased the Nesco Gardenmaster Food Dehydrator & Jerky Maker. 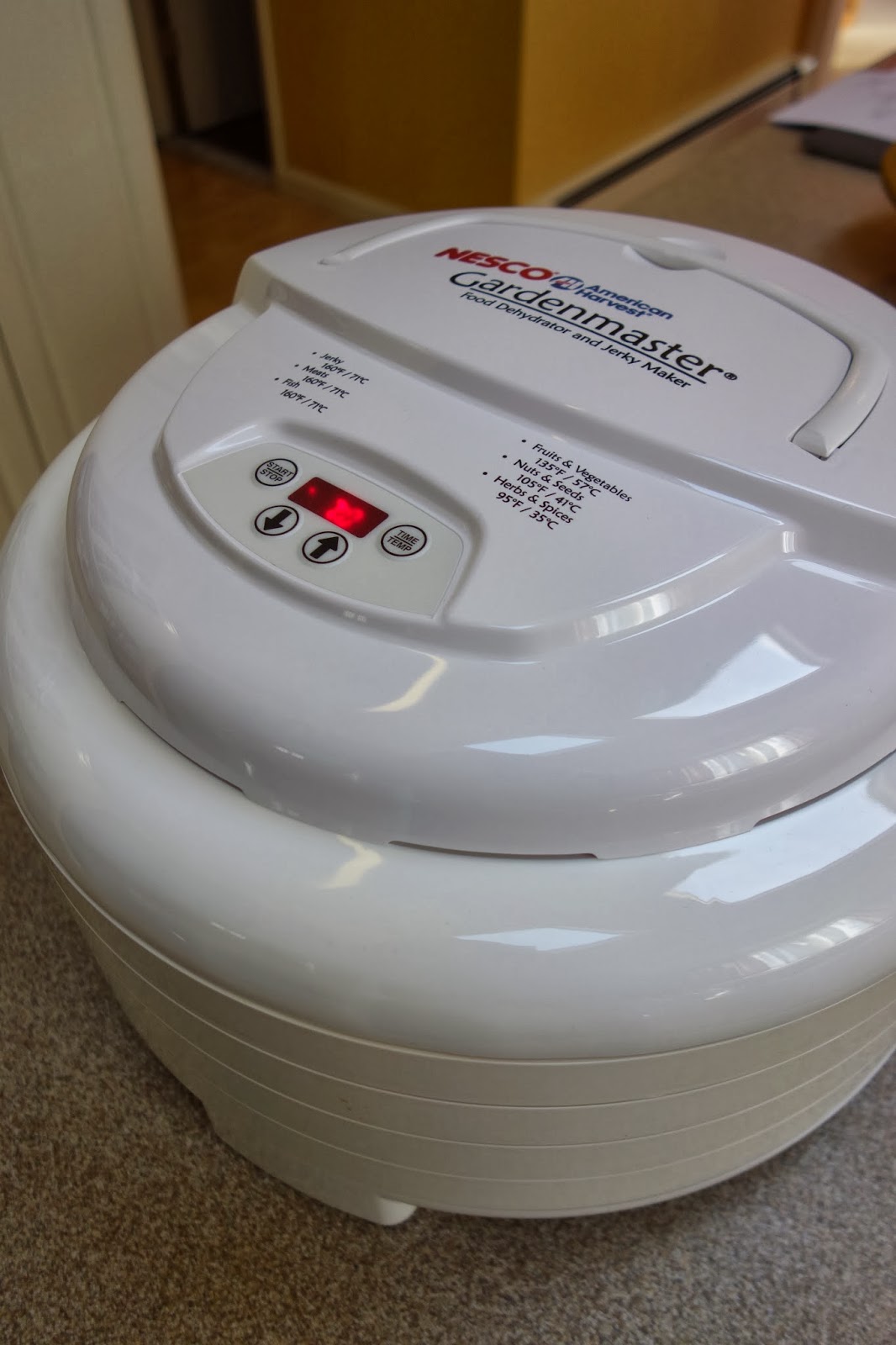 It kind of looks like a Lunar Module – and I may need the assistance of NASA to figure out where I’m going to store it.  The device consists of several layers of mesh trays topped off with a fan and a temperature control setting.  The Gardenmaster can be programmed for different times and temperatures, and the fan circulates air down over food that is layered in the trays, eventually dehydrating the fresh food.

February – being the longest month of the year – is a good time to practice.   So I purchase apples, carrots and zucchini so I can start rehearsing for the summer months.  You need a bit of space for a Gardenmaster, and it can sound like somebody’s running a hairdryer for hours on end.

Carrots take about six hours to dehydrate.   Here’s the before shot, which begins with carrots sliced a ¼ inch thick, that have been steam for three minutes prior to dehydrating. 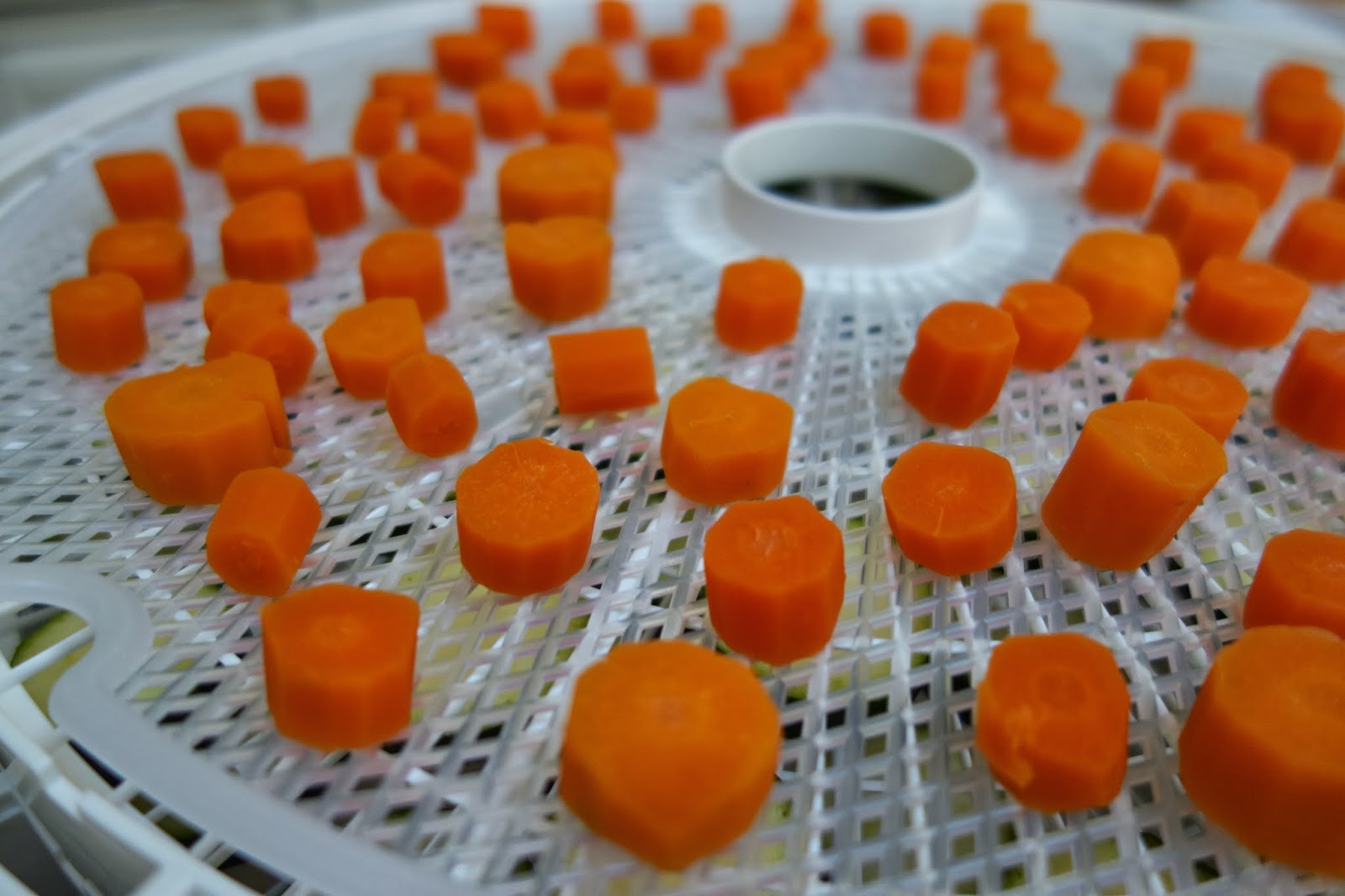 The transformation is startling.  What were once disks of fresh carrot, now look like the cubes in a packet of Cup A Soup. 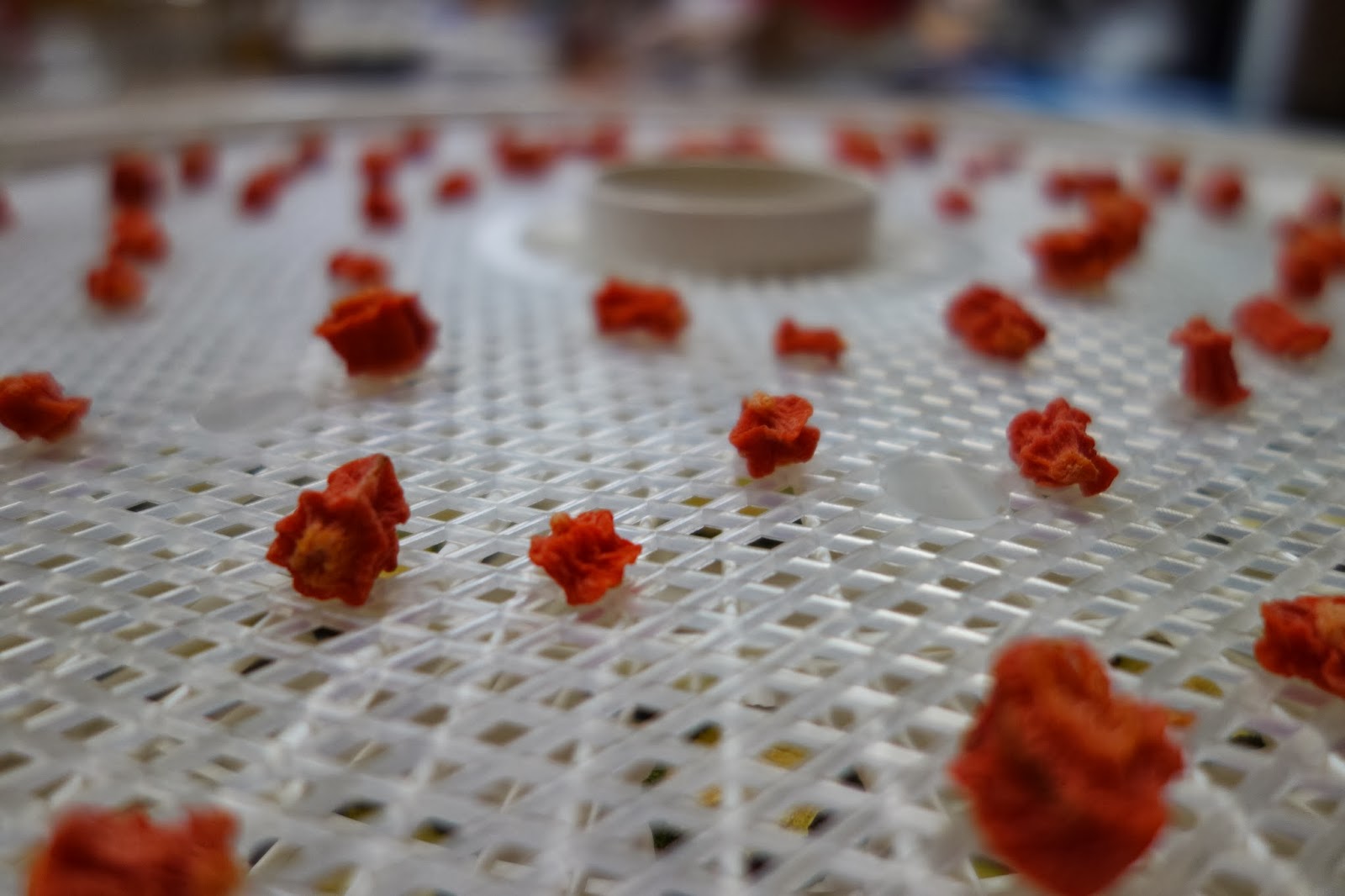 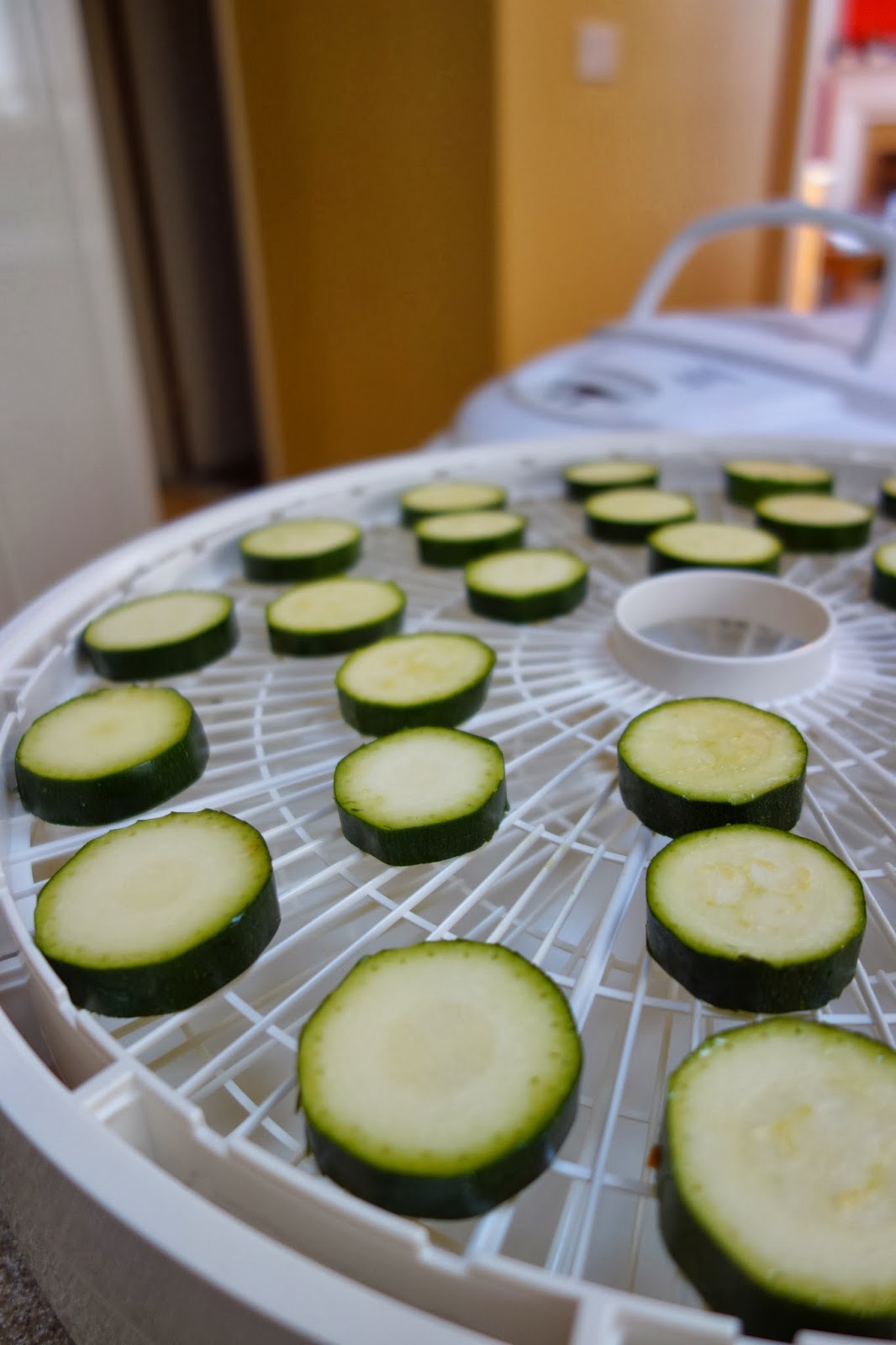 Here’s the result after seven hours of dehydration. 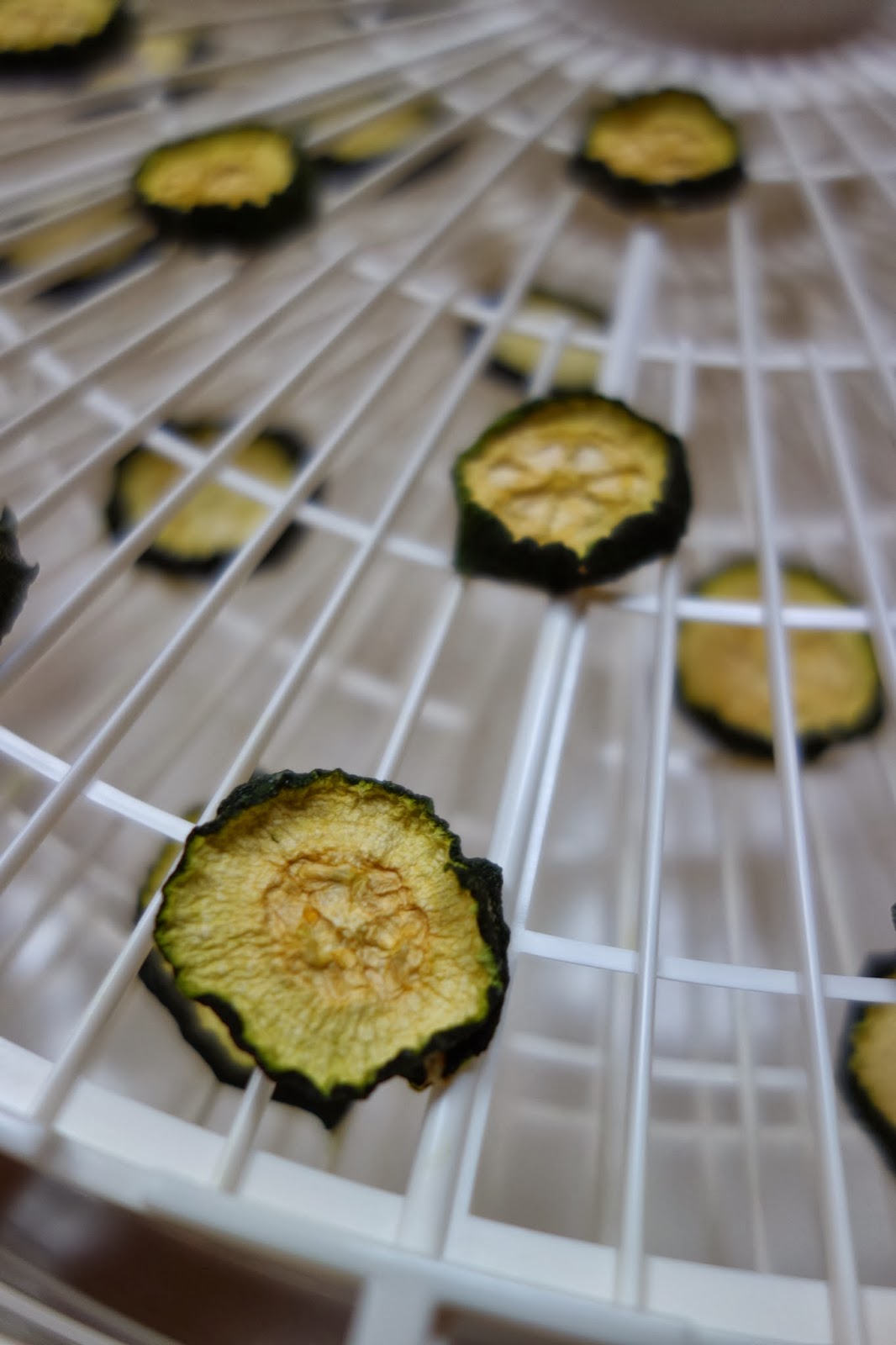 While I neglected to take a “before” picture of the apples, here’s the result after six hours of dehydration. 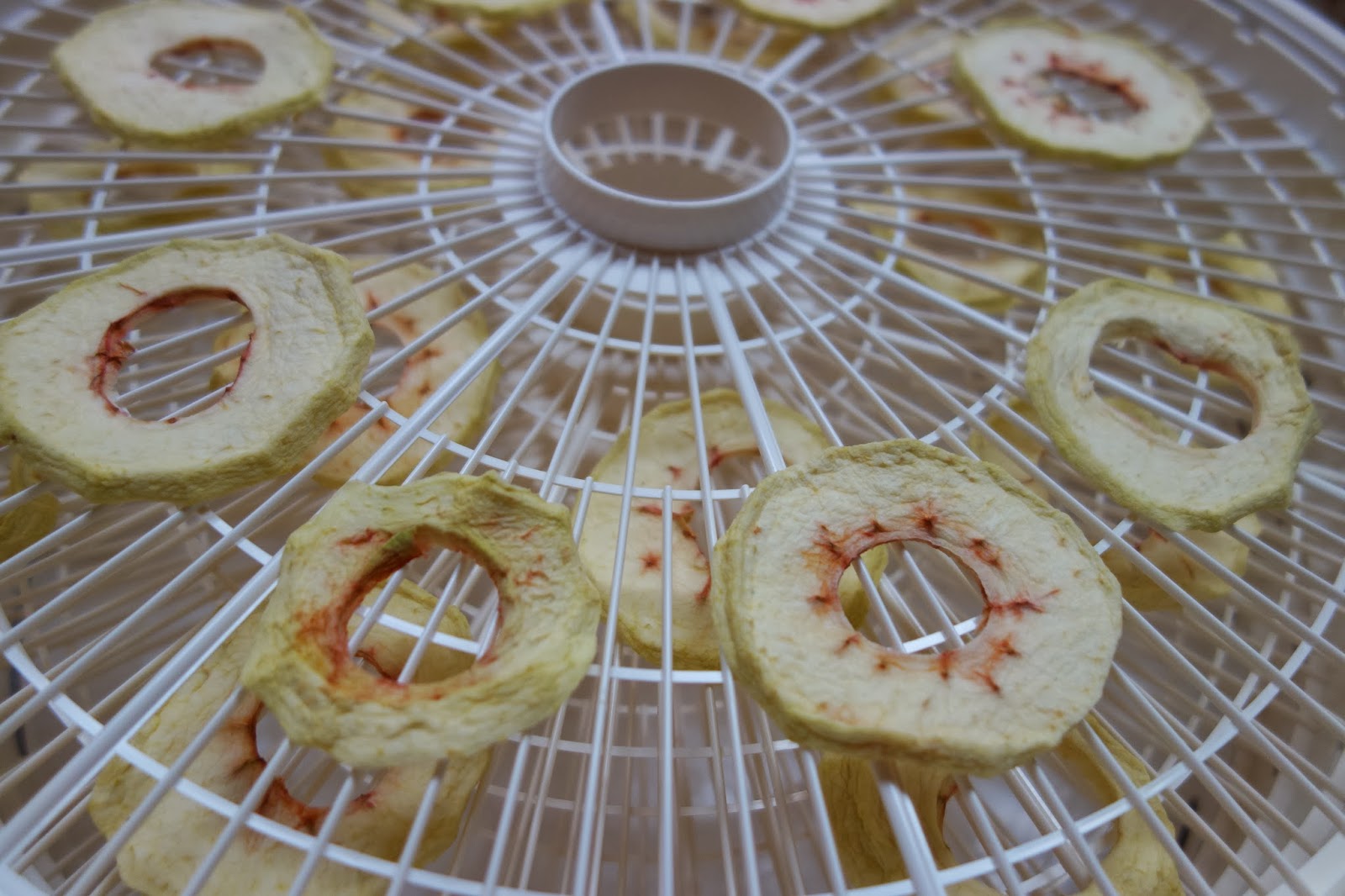 So here are some initial impressions. Four zucchini shrink down to about a cup of dried zucchini chips.   The shrinkage for carrots is even more dramatic.  I will need to better understand the ratio between fresh food and dehydrated food, in order to effectively plan recipes. 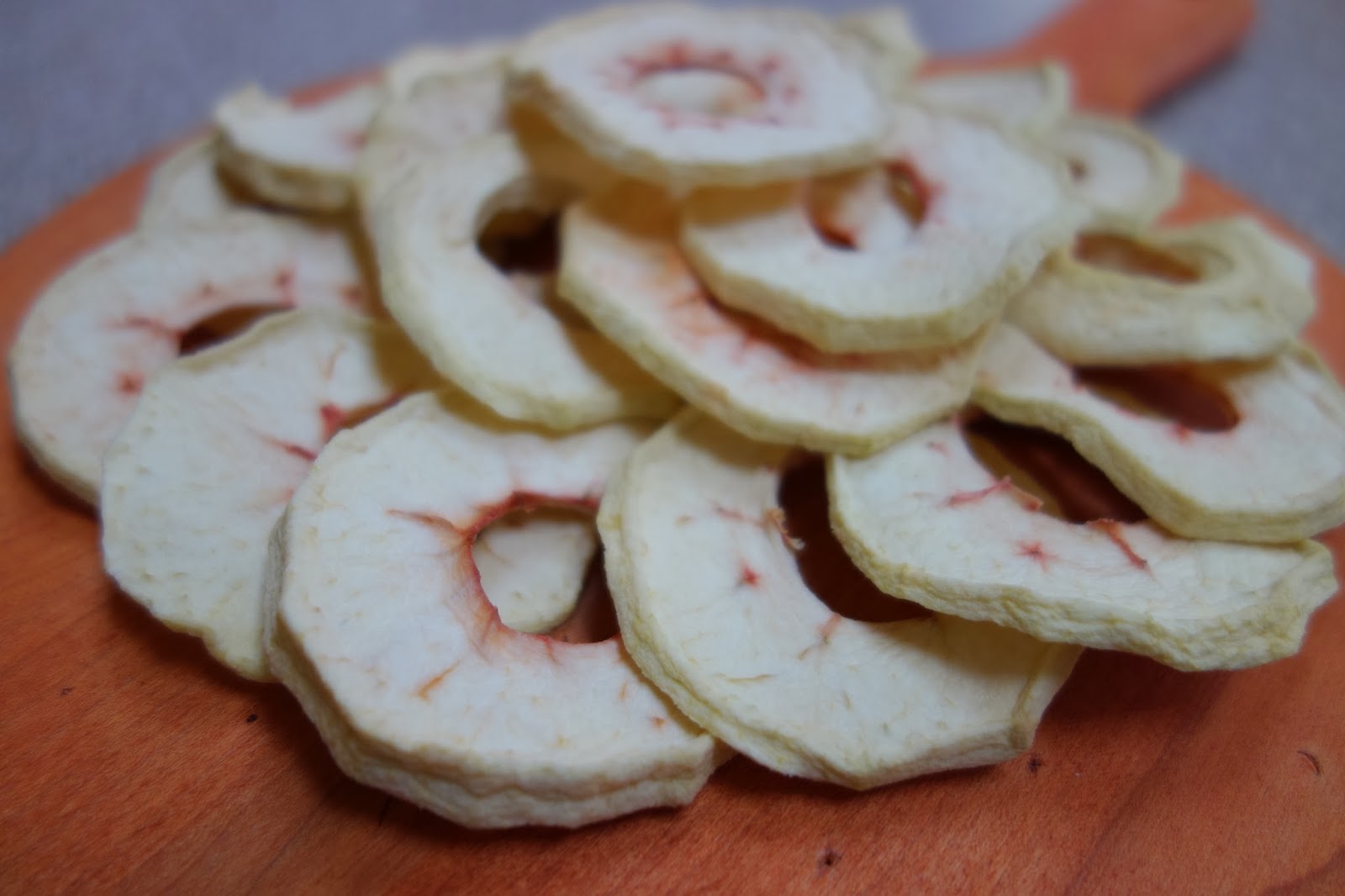 For apples, the size stays somewhat the same, eventually achieving a soft, leathery appearance. The taste is intensely apple, probably due to the concentrated sugars.  The carrots, too, taste very “carroty” because of the high sugar content. 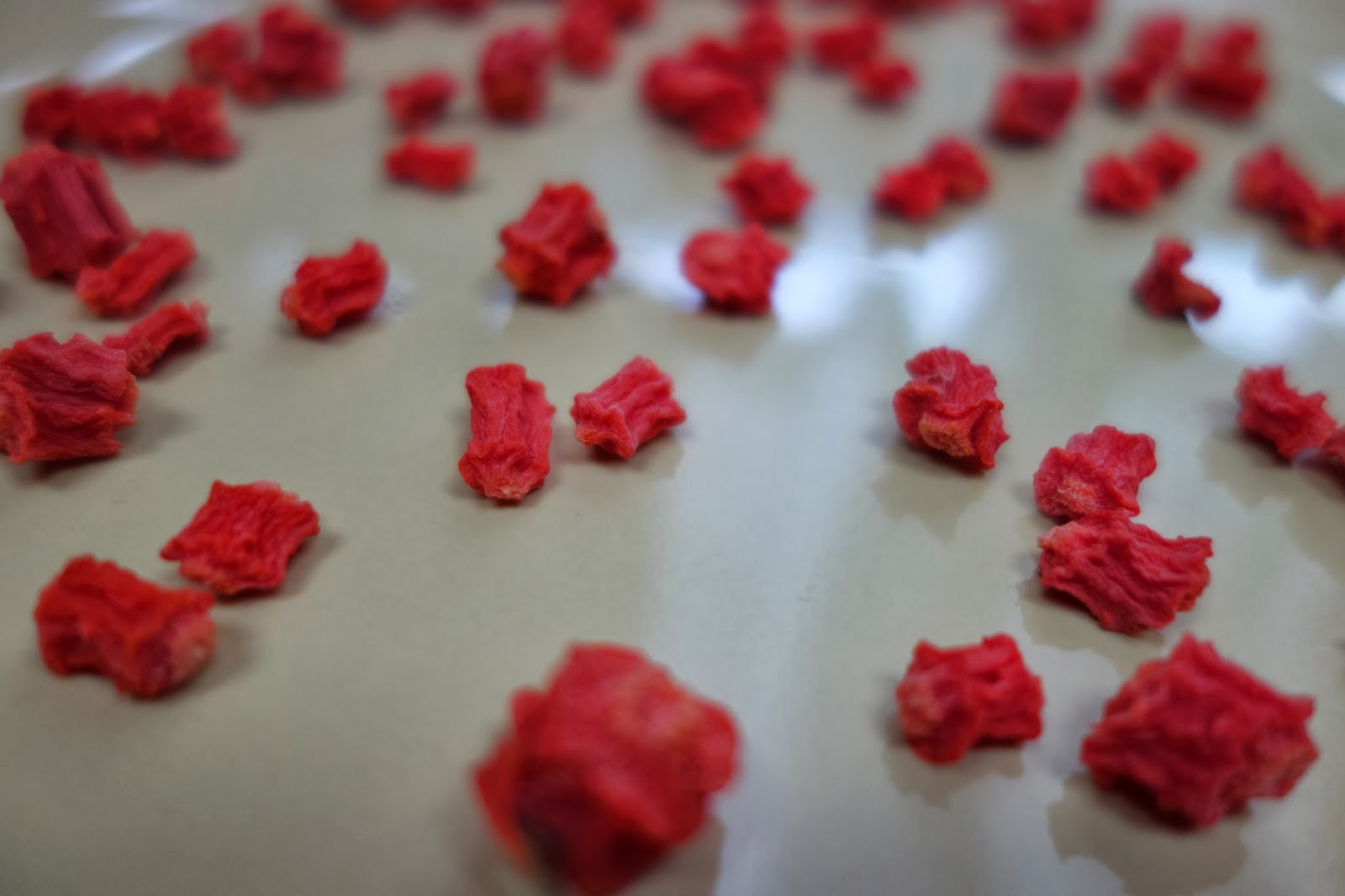 So, what will I do with all this dehydrated food? Well, the apple rings will make tasty snacks, and the carrots and zucchini can be tossed into soups and stews. 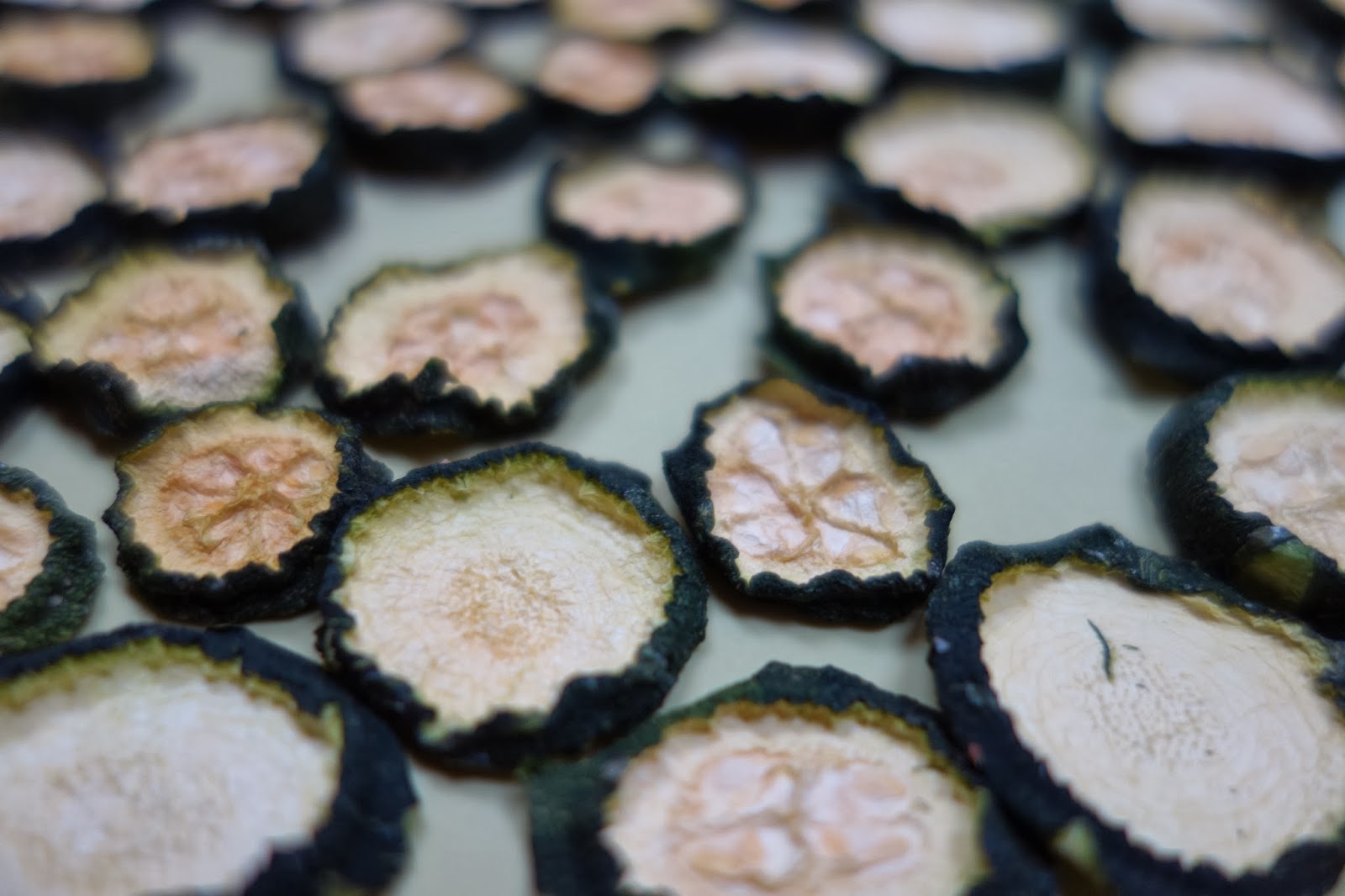 And, there’s an interesting cookbook called “The Dehydrator Bible” by Jennifer MacKenzie, Jay Nutt & Don Mercer, that contains over 400 tasty recipes using dehydrated foods.   The liquid in the recipes rehydrates the food.  But, that is for another post. 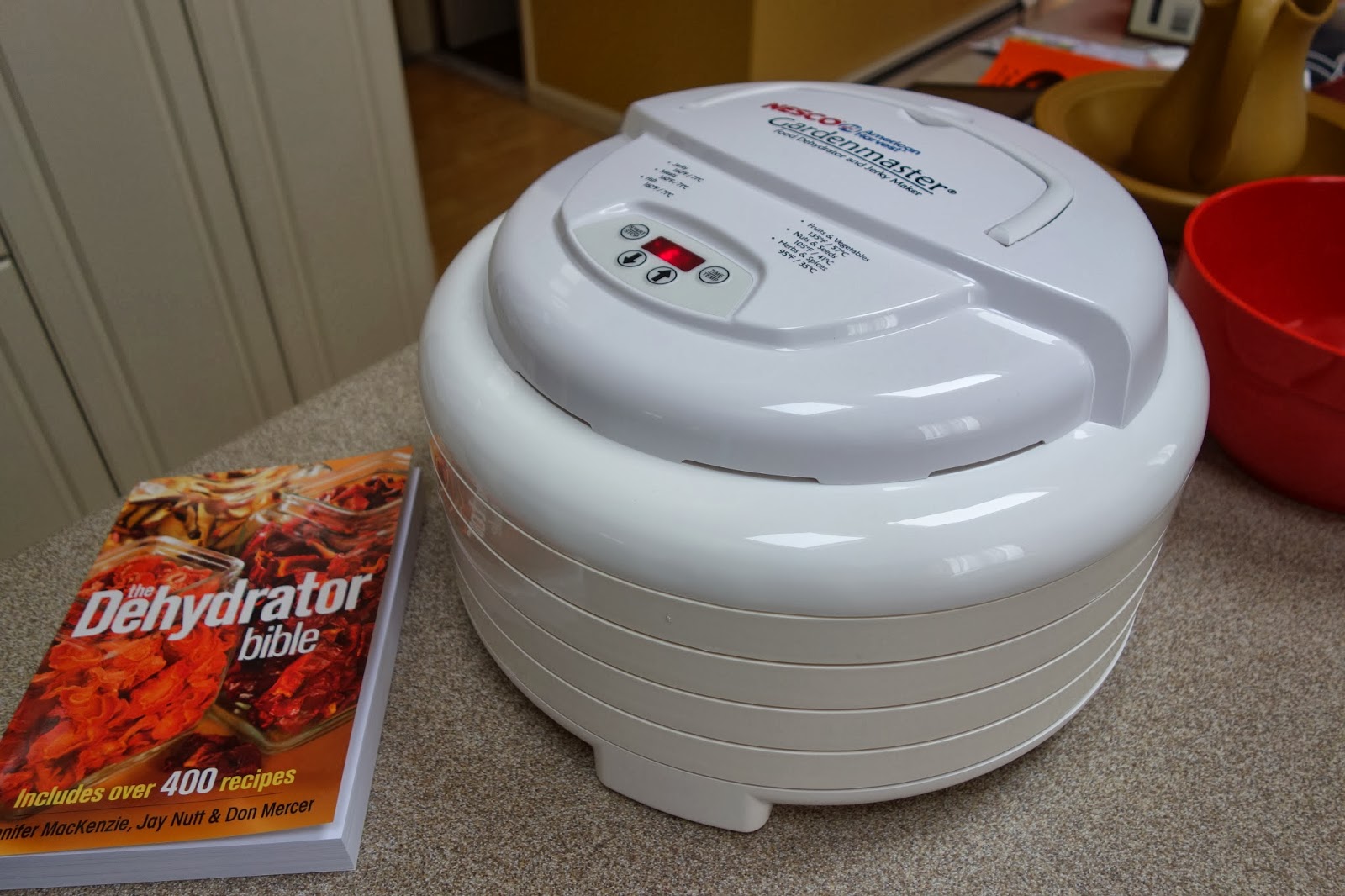 Now, excuse me while I go search for a moisturizer…

For a more frosty take on food preservation check out my latest post for Edible Long Island.

What a fabulous way to preserve a bounty of vegetables. I confess my MIL gave us a dehydrator many, many years ago and I was busy working and had no idea how to use it (or where to store it), so I gave it to someone. Now I wish I had had the dehydrator book to peak my interest. Hmm, perhaps I should have kept it after all...
Sam

Yes, storage is an issue, Sam. I've spent the weekend rearranging the kitchen to be able to store the device, and also have it handy when needed. It's tall and wide ….

Someone gave me one years ago. I used it at the farm a few times but just couldn't get into it. Then an important piece disappeared and I tossed the machine. We used it on tomatoes and it worked well but since we had a giant freezer in the basement, I usually just froze the crops. Your experiments look amazing. Especially the carrots. who knew they would have so much water?

I wonder, does it work on kale?

Deana, I thought it did work on kale, but now I can't find anything in either of the books that mentions kale. Somewhere, I thought I saw a recipe for kale chips. I would guess the dehydration time would be much less. I'll keep looking, because there's always plenty of kale ...

We just do kale chips in the convection oven. I have been wanting a "real" dehydrator for some time now. I am going to check out this model. Thanks.

I've been doing this for years. I love doing the fruit like strawberries, kiwi, peaches, apples, I don't make beef jerky very often but I love it. Try doing some tomatoes. I store them in the freezer after. Just remember that you have them. Also slice up some sweet potatoes and dehydrate them for your dog. They make a healthy snack for your best friend!

Did I see that this thing also makes jerky?! This might be the best purchase you've made in awhile, TW....

I highly commend you on your efforts, T.W! I've often thought about buying a dehydrator but never could muster up the guts.

Like most appliances, it is going to take a while to adapt to but I'm sure you have made a wise investment.

Unfortunately, I don't know much about food dehydration and surprisingly, I don't have a cookbook devoted to it. I did find a recipe in a book from the Sierra Club for Dried Fruit Bread that I will email to you tomorrow. I don't think you are going to have much trouble coming up with using or storing it especially since so many people are more aware of food preservation these days much like the 60s:)

As for a skin moisturizer, Marion swears by a very light coating of Vaseline:) Good Luck T.W! I can't wait til you share your creations:)

So, once the food is dehydrated, how will you store it, and how long will it keep?

Well, therein lies an interesting opportunity, or dilemma, Lydia. One book suggests storing apple rings in airtight Ball Jars. Others suggest ziplock bags that go in the freezer. If I really want to do this right, I need to buy a vacuum sealer that would allow me to store the dry food in the freezer indefinitely. But, that would mean purchasing yet another appliance, that I'm sure I don't have room for. Maybe I could donate the laminator I purchased in 2000?

I heard great things about the food dehydrators! Your machine looks like a really good one!

Thanks for showing us your produce that is dehydrated! What a difference!

I used to have a much simpler version of this machine, and now I wonder what ever happened to it? Sounds fun!

Loved seeing your experiments, T.W.!
I've done this in the oven and was so pleased with the results.
But this is a super machine and I'd love to have one....where to store it is an entirely different problem.

Dear T.W., Sounds interesting. I suppose it is a good way to store the food that will not be consumed in time to use fresh.
Well, spring is just around the corner.
Blessings, Catherine

Your post gave me a real smile. First I know what you mean about our skin during the winter. Maybe soaking in some broth would plump me back to having moist soft skin. It will be very interesting to see how you like using the dried vegetables in recipes instead of fresh.

Oh wow...I have enjoyed learning to preserve and do I dare take the leap and enjoy dehydrating to? (smile).

This looks fun and is a great way to preserve vegetable/fruit bounty.

I sooo laughed at your CSA comments. Even after being a member 20 years, I still compost the fennel. This year I did a lot more canning too--much fun, though probably better for fruit than the more common CSA veggies. Except it saves me during the cucumber rush (I slice the long cukes and make hamburger dills). I dehydrated some tomatoes last year and will do more next since they are proving very useful. WIll have to think about what else I might do. BTW Louise sent me over here.

:) Fun post. Make sure to try dehydrating tomatoes in summer (you can soak 'em in olive oil for your very own sun-dried tomatoes, all year long) and also apricots. They make good 'n tangy snacks. Enjoy your dehydrating, it is fun!

new contraption for TW! Beef Jerky sounds yummy. My new oven has a convection setting, going to try and experiment, however a dehydrator would be a nice addition. Let's take canning first shall we? :)