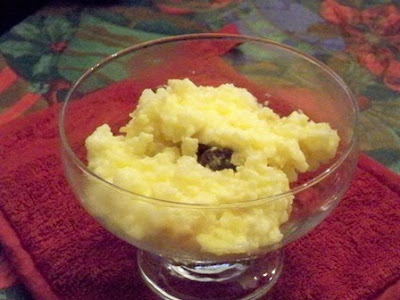 I won this recipe in a blind, white wine tasting contest about ten years ago. It would have been a better story if it were a poker game, but what can you do? I’m not bad at wine tasting – better at red than white – but I had incentive to succeed. At stake was Mary D’s famous Rice Pudding Recipe, the most closely-guarded secret since Batman’s alter ego.

I’ve been friends with Mary D for more than a decade. She’s a classy, sassy blonde who teaches math to kids on Long Island (don’t mess with her), sings choral music and is an accomplished guitarist who does a kick-ass rendition of the theme from “Secret Agent Man” (among other more traditional works). She also has a wicked sense of humor. Some might call it notorious.

Mary’s Rice Pudding recipe is a classic – a signature dish and crowd pleaser that became a hotly-anticipated offering at pot lucks, holiday parties and buffets as we forged our way through life on Long Island in the mid-1990s.

There it was again at my brother’s annual Carols and Carousing party just after Christmas. Mary had brought her Rice Pudding – covered in foil – in one of those archetypal Pyrex oven-proof bowls. She’d thought of everything. Half of the pudding contained raisins, and half was plain, in case somebody at the party didn’t like raisins (try and figure out that technique!).

Some time later, I decide to give it a try and dig out the recipe, long-buried in my somewhat poorly organized “historic recipe” file. The directions are exactly what you’d expect from Mary – straight-talking and to the point. It’s not a simple recipe – and requires more than an hour of hands-on preparation.

When the pudding comes out of the oven, I dial up Mary.

“Are you ready for a rice pudding break?” I ask. “I made your recipe and I thought you might like to check it out.”

“Because I’m the Alexa Hente of rice pudding?” she asks.

I show up on Mary’s porch that afternoon, covered dish in hand. She passes out bowls and she takes a taste. I hold my breath. Mary is not the type to gush with praise. She nods slowly and approvingly. It is good. That’s praise enough for me. 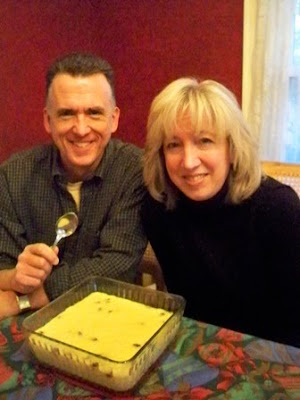 I ask her why the rice pudding became her signature dish.
“It’s traditional,” she says. “But, people don’t make pudding much anymore. I serve it warm, which is nice. It’s very comforting.”
She tells me she got a version of the recipe from a colleague some twenty-five years ago and “changed it up” a bit to make it her own.
“Most people bring Entenmann’s or Dunkin Donuts to a party,” she says. This takes time. It’s unique.”
For years, Mary has kept this recipe under lock and key, awarding it only to me after proving my nose for white wine. She’s now graciously agreed to share it with the readers of Culinary Types. And, you don’t even have to know the difference between a Pinot Grigio and a Sauvignon Blanc.
As the rice cooks, it takes on the characteristics of a creamy risotto. When the eggs are added, and the pudding is baked, it emerges from the oven a glowing, sunny-golden color. The raisins add a little attitude. Mary recommends serving slightly warm, or at room temperature.
I think you'll agree that it's a classic - just like Mary D. 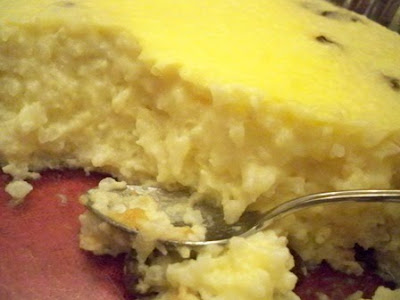 1. Boil the water. Add the butter, salt and rice. Continue boiling mixture for 7 minutes stirring often.
2. After the 7 minutes, stir mixture again making sure none is stuck to the bottom. Then add 5 cups of milk and turn flame on high for a few minutes to get things going. Keep stirring.
3. When the mixture heats up pretty well, turn heat way down and simmer covered for one hour, stirring often.
4. While that is simmering, combine eggs, sugar and vanilla and beat with a whisk until well blended. You’re gonna bake in this so you should be using a large oven-proof bowl or casserole.
5. The rice mixture is done when you’ve got a nice thick consistency. At that point, pour the rice mixture into the egg mixture stirring vigorously. When that is thoroughly mixed, add raisins and bake for 20-25 minutes at 350 degrees.

I must confess I've never made Rice Pudding. I don't know why; just haven't. Perhaps it's because my mother never made it. Mary D's notoriously-good pudding sounds like something I too would serve over and over again. Why mess with a winner, right?

Mary, it's nice to meet you. Great story T.W
Sam

I wish you and Mary D lived closer to me. I would have been happy to join you for the tasting! Thanks to Mary D for sharing her signature recipe, and to you for introducing Mary D to us.

Mary D sounds like quite an impressive gal. Rice pudding is comforting and unique. This recipe looks terrific!

Thank you, Mary D. for sharing your prized recipe. I love rice pudding, and I agree that it's comfort food. I hope to queue this recipe into my "hurry up and make it" file. I'm adding the raisins, too. I love them.
Great recipe!

I am making this as I write, and just finished mixing everything together to put into the oven. It tastes amazing and I can't wait until it's done baking so I can scoop out a real serving instead of just slurping the edges with a spoon :D

Thank you so much for sharing this, I love a good rice pudding!

Please tell the "Big Blond" who I have known for over 30 years, that she needs to get to Bermuda to make this dish for my 50th birthday! I have always enjoyed going to Mary's house for a meal because she always puts alot of thought, love and care into what she serves. Well done.

There was a secret rice pudding recipe hiding on Long Island and I didn't know about it!!! Oh thank you Mary for sharing this recipe and you, T.W. for the sweet "garnish."

Rice pudding recipes are one of those kinds of recipes that you just never have enough of. I'll be trying this one!!!

I love rice pudding and haven't eaten it in a while. Love those pictures.

Anyone who can keep a recipe a secret that long has got to be a quality gal. I should have more friends like that! Got to give this one a go.

I have been searching for the perfect rice pudding recipe since I was a child. The man who lived across the street from us made the most divine rice pudding. Of course I was only a child but even then I knew good food and Bob's rice pudding was the best! When Bob made rice pudding the whole neighborhood came around. Nothing I have ever tried stacked up to his. Rats!

we are never full said...

whoa... this is making me drool. my popo used to make the best rice pudding. i've asked him for the recipe many, many times but have yet to get it. maybe i'll try this one!

Mary D- I can't wait to try this! Thank you for sharing, rice pudding has become a lost art! Tom, thanks for a great blog and for sharing your friend with us... Cousin Meg