A Birthday Bite of the Big Apple 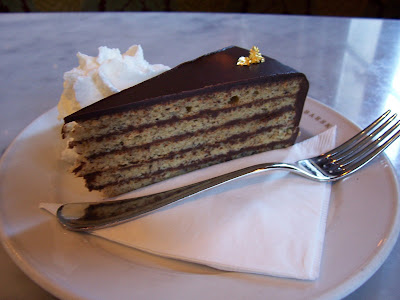 Today, I am another year older. The birthdays seem to come faster now.

There are certain inevitable truths about my birthday. Sometimes it falls on a holiday, and everyone gets the day off. Hurray! If it doesn’t fall on a holiday, I take the day off anyway and dream up an adventure just for me. Either way I win.

Other birthday truths – it is certainly going to be cold, as anyone born is January is forced to reconcile. You rarely celebrate with a backyard barbecue. If the sky is clear, the moon is usually nearly full, something I have always considered a celestial celebration of me. Finally, my birthday celebration, whether it lasts one day or a week, will most certainly involve food.

A prior plan to fly south for the long holiday weekend has been scuttled by a pesky sinus infection, but I am nothing if not resilient, especially at my age. So I cook up an alternative escapade – an epicurean expedition through various neighborhoods of Manhattan – a chef’s tasting menu of the best that New York has to offer.

I am bundled tight as I trot along East 86th Street towards 5th Avenue. Central Park is visible just ahead. I turn into Café Sabarsky at 1048 Fifth Avenue. It is part of the Neue Galerie which contains 20th Century German and Viennese art. 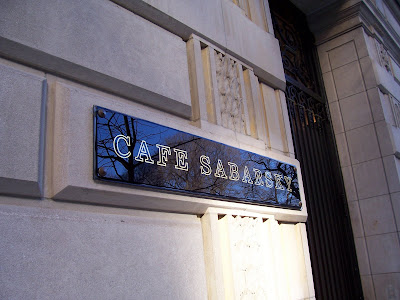 The café is in the style of a Viennese coffee establishment. I slide into a booth with a white marble table and a red and gold velvet upholstered banquette. I order espresso with hot milk and foam, or Wiener Melange. The steaming, caramel-colored drink is delivered on a silver tray. 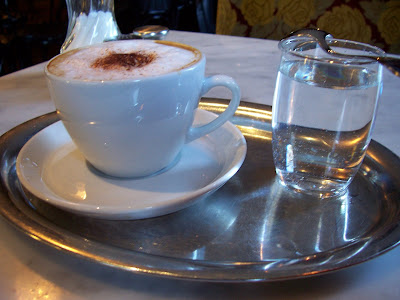 My breakfast entrée is Klimttorte, a traditional chocolate and hazelnut confection (pictured above). The cake – a Viennese Waltz of delicate chocolate and nutty layers – is finished with a regal accent of gold leaf. 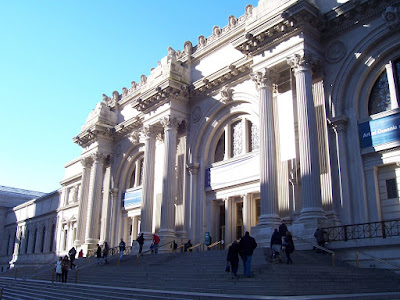 Several hours are spent at the Metropolitan Museum of Art viewing everything from Van Gogh’s “Wheatfield with Cypresses,” the new Galleries for Oceanic Art, and a jewel-box-of-an-exhibit of timepieces called the “Art of Time” which is a slightly sobering experience on one’s birthday.

As the afternoon marches on, I head downtown to Greenwich Village. The guide books tell me that Greenwich Village was once a “country village.” The maze of narrow streets mimics the boundaries of small farms and streams of centuries ago. 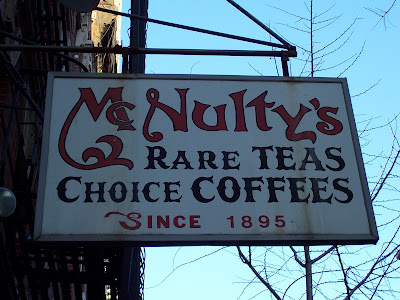 McNulty’s Tea and Coffee is at 109 Christopher Street. The shop opened in 1895. At that time, the location was just about on the banks of the Hudson River. Tea and coffee were unloaded at the docks and sold at McNulty’s. Inside, there is an ancient tin ceiling and rustic bins of coffee and tea. I am torn between several options, and inquire about the difference between Delmonico, Turkish and Viennese-style coffees. The man behind the counter explains that the coffees are listed from mild to strong, with Viennese being the most robust. He tells me that McNulty’s once supplied coffee to the famous New York restaurant Delmonico’s, hence the name of the coffee at the top of the list. That’s enough to convince me to buy a pound of the coffee. 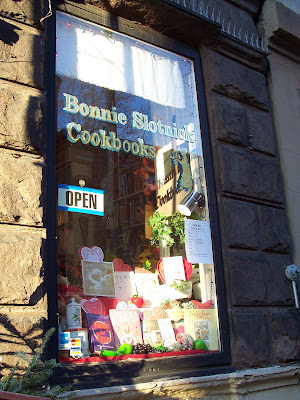 On 163 West Tenth Street, I enter Bonnie Slotnick Cookbooks. Bonnie is a dealer in vintage cookbooks, and her warm and comfortably-decorated narrow shop is stocked from floor to ceiling with every conceivable cookery book, the collection numbering nearly four thousand. Specialties include cookbooks on American regional cooking, children’s cookbooks and housekeeping manuals. I locate a facsimile of Mrs. Beeton’s Book of Household Management, and an early edition of the Boston Cooking School Cookbook by Fannie Farmer. Bonnie and I have a long chat about cookbooks and the people who love them, which will be the subject of an upcoming post. 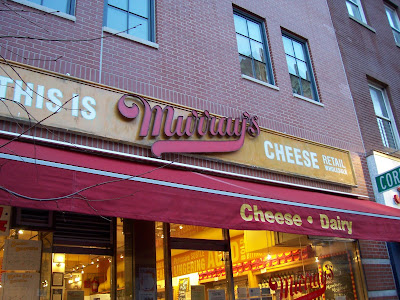 The sun is starting to set as I approach Murray’s Cheese at 257 Bleecker Street. In fact, the store is bathed is a golden haze. But, maybe that’s the warmth radiating from within. Murray’s has operated at several locations in Greenwich Village since 1940, and was originally opened by Murray Greenberg, an Eastern European immigrant who operated a wholesale butter and egg shop. The current owner, Rob Kaufelt bought the shop in 1991. There is a long glass display counter generously stocked with wheels of cheese from upstate and across the world. I don’t know where to begin.

Jonathan, an affable staff member wearing a red ball cap and wire rimmed glasses, asks me if I’d like a sample – “Just pick anything,” he advises. Jonathan takes me on a vigorous run up and down the cheese case sampling exquisite slivers of cheese that warm me to the bone. When we are done, he has introduced me to Goat Tomme from Twig Farm in Middlebury, Vermont (described as “fudgy”), Meadow Creek Grayson, a washed rind cheese made from raw Jersey cow milk, Gres Des Vosses, a cousin of Munster with a “barnyard aroma” and a creamy and potent Cashel Blue from Ireland. Jonathan wraps each of my prizes in gold and white Murray’s paper, and places them in a small wooden box that I take to the checkout counter. 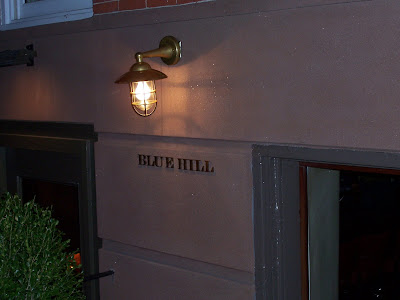 It is dark and frigid when I arrive at the restaurant Blue Hill at 75 Washington Place. Supper is spent dining at the bar, where Rocky the bartender is the master of ceremonies, entertaining a group of Monday night regulars.

Rocky is a powerfully-built gentleman with a welcoming smile who bears a resemblance to the actor Lou Gossett Jr. in his prime. Blue Hill is Chef Dan Barber’s restaurant, set in a Greenwich Village townhouse, where the meat and organic vegetables are shipped in daily from Stone Barns in Pocantico Hills, New York. Chef Barber is one of New York’s leading proponents of the locally-grown movement.

Inside Blue Hill it is toasty. Rocky’s cohorts around the bar include Tamara, an opera singer, wine purveyor and ringleader of a weekend supper club, and Warren and Ally, a young couple from the neighborhood.

My appetizer is This Morning’s Farm Egg, Foraged Mushrooms, and Stone Barns Greens, Lettuce and Herb Broth, served with a spicy Pinot Noir from Ayers Vineyard in Willamette Valley, Oregon. The fresh poached egg nearly melts over the haystack of warm greens and broth. My entrée is Stone Barns Berkshire Pork. A waiter brings the hot plate to the bar and says, “You are the proud owner of this beautiful pork chop.” It is indeed gorgeous – a glistening chop with a Frenched bone, sitting atop a dark, glossy reduction of cranberries and root vegetables.

In between, Rocky serves up his homemade version of an apple martini, a powerful concoction that suggests liquid apple pie in a cocktail glass.

Rocky doesn’t quite approve of my choice of Apple Cobbler for dessert, and instead recommends the Chocolate Bread Pudding with Chocolate Sauce and Vanilla Ice Cream. Warren heartily endorses the idea. “If you don’t like it, I’ll finish it,” he offers.

He doesn’t have to. 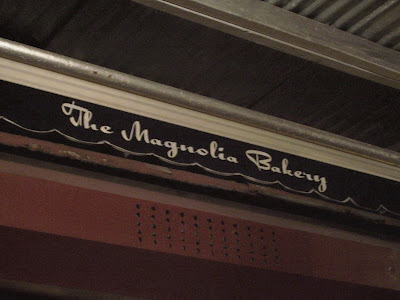 After dinner, I make one more stop, even thought the night temperature has dropped considerably. I walk briskly to Magnolia Bakery on 401 Bleecker Street, home of some of the best-loved cupcakes in New York. Veronica has recently reminded me how we had wandered aimlessly last summer in search of the shop. This time I’m taking no chances and I’ve brought a map. Standing outside on the street, I nearly talk myself out of a purchase. After all, that bread pudding that Rocky insisted I eat was pretty filling. But then, those red velvet cupcakes in the window call to me. “It’s your birthday, T.W.,” they chant. “You must have cupcakes!” 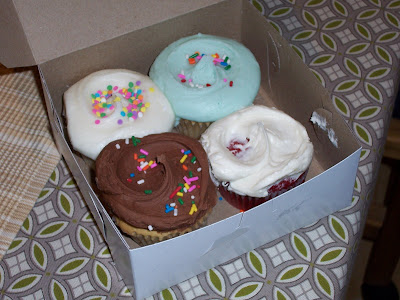 I squeeze my way into the tiny shop, take a piece of wax paper and select four cupcakes which I place in a white cardboard box. The young man at the counter barely looks up, but slaps cellophane tape on the box to keep the lid secure, and takes my money.

Nothing frothy or saccharine. Just cupcakes to go.

I take the cupcakes home, and they are a fitting culmination to the day.

If there is any insight to my birthday story, it is this – all over New York, and in every town, there are people just waiting for you so they can share the best that life has to offer. Take them up on it. You won’t be sorry. It will taste good!

Happy (slightly belated) birthday, TW -- we are practically birthday twins! I love a birthday that starts and ends with something baked -- and something chocolate -- and in between is all about food and art. Sounds just perfect to me. May the coming year bring you more of the same.

What an absolutely splendid day you have described! I'm not sure which is the best part--the cookbooks or the food! Happy Birthday T.W.!

T.W., Happy Birthday!!--even if a little late...
I enjoyed your description of your epicurean expedition through Manhattan.
In fact, I will be in NYC in a few days, and I plan to follow your advice and find the time at least for tasting the wonderful Klimttorte and visiting Bonnie's vintage coo books store.

What an absolutely delicious day! You hit several of my favorites. I adore McNulty's!

Thanks so much, Lydia - I agree cake as "bookends" is probably the perfect day!

Thanks, Patricia - congratulations to you!

Kathy - for me, it's always a toss up between food and cookbooks, so why not go for both?

Hi Manuela - Welcome and thanks for visiting! I hope you enjoy your time in NYC and let me know what you end up doing.

Cakespy - Thanks for visiting! McNulty's is great, so steeped in history, and I'm really looking forward to several hours of serious coffee drinking this weekend!

I love that you take the day off, it sounds like it was a wonderful one! Happy Birthday!

Hi Brilynn - Thank you! I do think it's important to take the day, otherwise, it all passes by so quickly, and what better thing to do for yourself than a day of celebration?

A very Happy Birthday to you TW :)

Happy belated birthday T.W. ! That is such a wonderful day you had for your special day. I'm glad you went to Magnolia bakery...soon maybe I will pay it a visit too.

Happy birthday, TW. I came here thinking I would find some wonderful food [and I did, sort of]. But mainly I was blindsided by a well-told story of a glorious day in Manhattan. Now I'm sitting here in Chicago [no slouch itself, I know] totally jonesing for New York!

Lovely blog, by the way. I'll be back.

Maryann - Thank you! Nothing like a food day in NYC, right?

Hi Veron! Thanks so much! If you're back in NY, you better let me know - I can conjure up a full day of cupcakes if you like!

Terry B - welcome and thank you for visiting. I appreciate the kind words. I just took a look at Blue Kitchen and can't wait to read more. Chicago is one of my favorite food cities, by the way!

Oh, I'm so sorry I missed your birthday. Happy belated b-day, my friend. It sounds like you had a fabulous day. Here's wishing you another adventurous and delicious year!

Thanks so much, Susan! I am hopeful for a delicious year ahead!

Gotcha! I did a bit of sleuthing in my search engine and lo and behold, I found this post:)