A Conversation over “Mystery Cake” in 1950 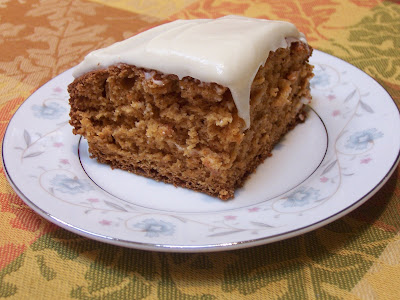 Ruth pushed back the gingham curtains, looked through the kitchen window and surveyed her rose garden. She smoothed back a lock of steel gray hair from her forehead.

On the counter was a well-used cookbook that she’d ordered through the mail – “Easy Ways to Good Meals.” She had collected the required number of labels and sent them in to the company to get the free book. The cake recipe on page 36 would be just right for the Women’s Guild bake sale at church. 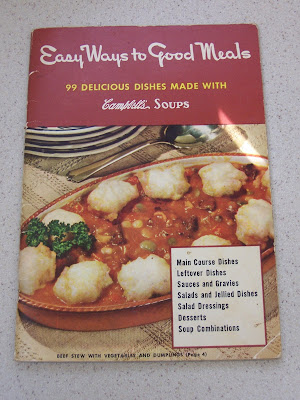 She pulled a cardboard cartoon of eggs from the icebox that she’d purchased that morning at Sunrise Market on Merrick Road. She cracked a perfect brown egg into a glass bowl. Several fragments of shell fell into the white, and she fished them out with her forefinger before briskly whipping the egg white and yolk together with a rotary beater.

She took a can opener and ran it around the rim of a can with a bright red-and-white label. She added the secret ingredient, alternately with a flour mixture that contained ground cloves, mace and nutmeg, and the batter turned a deep blush pink. She then folded in raisins that had been tossed in the flour. She placed the pan in the oven.

The ticking of the Sunbeam timer resonated in the otherwise quiet kitchen. Ruth liked to bake. With Ruthie and Jimmy away so often now, it was a good way to keep herself busy. 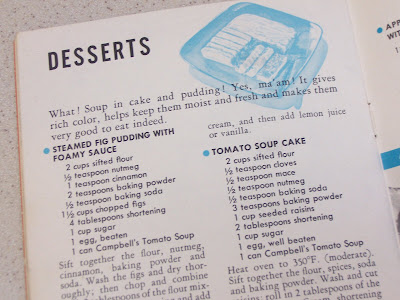 The timer chimed and she took the cake out of the oven to let it cool on the white Formica kitchen tabletop. The house was filled with the smell of warm, autumnal spices. In another bowl, she used a wooden spoon to blend together cream cheese and powdered sugar. She added vanilla, beat the mixture into ribbons of shiny frosting and spread it on top of the square cake.

At the front of the house, Ruth heard the rap of the wrought-iron door knocker. She surveyed the kitchen quickly and hid the red-and-white can that contained the mystery ingredient. No sense leaving the evidence out in plain sight.

Ruth opened the front door and found Marion Canon on her threshold.

“Hi, Ruth,” said Marion. “I was in the neighborhood, so I thought I’d drop off the Chinese Checkers set we borrowed.” She held out a brown shopping bag.

“Oh, hi Marion,” said Ruth and gave her a hug. “Come on in. Would you like some coffee?”

The women chatted as they walked to the kitchen at the back of the house.

“Are you and Jim still planning to join us for Canasta next Tuesday?” asked Marion.

“Oh, sure,” said Ruth. We’re going up to Lake Secor this weekend, but we’ll be back in plenty of time.

They sat at the kitchen table, and Ruth poured two cups of coffee. The finished cake sat in the center of the table. Marion examined the cake.

“That looks delicious. What kind of cake is that?”
“I made it for the Women’s Guild bake sale. Sing Olsen told me it's called Mystery Cake.”

Ruth lowered her voice, almost to a whisper. “Well … don’t tell anyone, but it has a can of tomato soup in it.” 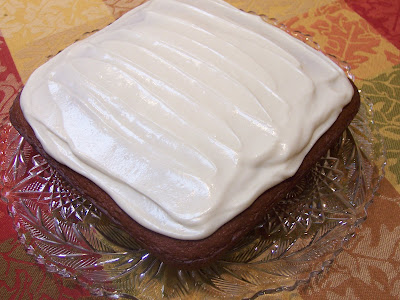 “Soup? In a cake?” exclaimed Marion.

“I’d like to give that a try. It might be fun to try and stump John. Can I have the recipe?” 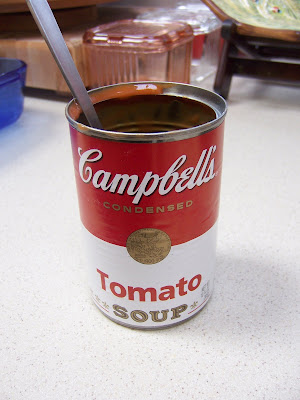 Ruth took a lined index card from the bureau drawer in the dining room and carefully wrote out the ingredients and instructions for Marion in her spidery penmanship:

Heat oven to 350 degrees F. (moderate). Sift together the flour, spices, soda and baking powder. Wash and cut raisins; roll in 2 tablespoons of the flour mixture. Cream shortening and add sugar gradually; add egg, mixing thoroughly. Then add flour mixture alternately with the soup. Stir until smooth. Fold in the raisins. Pour into a greased 8 ½ inch square baking pan and bake at 350 degrees about 1 hour or until done.

Marion took the index card and placed it in her handbag. She could no longer contain herself.

“Alright, Marion,” chuckled Ruth. “It would be nice to give it a taste and I suppose I can always make something else for the bake sale. Or, I can just cut it into squares and bring it to church on a platter!”

Ruth cut through the glossy cream cheese icing and sliced two squares of the cake, handing one to Marion. A few moist, russet-colored crumbs dropped from the spatula to the plate.

Author’s Note: Ruth Barritt was my paternal grandmother, whom we called “Nana.” She lived from July 1905 to August 2001 and was an excellent cook and baker. Despite her many successes in the kitchen, she would often present a finished recipe with the caveat, “I hope it will be all right.”

After reading a recent post by the Old Foodie on “Conversation Cake,” I found the recipe for Tomato Soup Cake in a cookbook that belonged to Nana called “Easy Ways to Good Meals.” The recipe for Tomato Soup Cake – sometimes referred to as “Mystery Cake” or “Conversation Cake” – is on page 36 of the pamphlet, which was published by the Campbell’s Soup Company in 1950. Most likely, the cake was given these names because the main ingredient was a mystery and, once disclosed, it inspired conversation. Various sources say that Tomato Soup Cake first emerged in the early 1900s when it was developed by Campbell’s. Some say the recipe originally contained canned tomatoes, but that ingredient was replaced by canned tomato soup in the 1920s. Food writer M.K. Fisher even mentions the recipe in “How to Cook a Wolf.” Many thanks to the Old Foodie for sparking memories of Nana and the wonderful aromas and treats that came from her kitchen in Laurelton, New York.

mmm, I can smell the coffee and almost taste the cake. Looks great! Do the big food manufacturers still publish recipes? What a fun job to have...I've always wondered who those people were in the test kitchens.

tomato soup in the cake? Very interesting. But how did it taste? It definitely looks yummy and I would not have ever thought it had tomato soup!

I love your post. I was 5 yrs old sitting right at that formica table watching her cook.

And many thanks to you, TW, for sharing this lovely story and memory of your grandmother with us. Tomato soup in cake, eh? Well, why not?!

Diane - it did smell excellent! I still see some cookbooks from Campbells, but not to the extent they were produced in the past. Can you imagine testing all those unsual recipes?

Veron - it tasted a little like carrot cake, a little like pumpkin cake. And no one who tried it at the office today could identify the mystery ingredient!

Hi Sandi - they are great memories. It is amazing what food can evoke.

Lydia - thanks so much! Technically, a tomato is a fruit, so it's not as far fetched as it sounds!

Now, that's truly a first for me! I would never have thought of tomato soup in cake. Any idea what the original intent of using it was--for instance, was it supposed to be for moistness? Or did Campbell's need to boost their sales?;) Quite intriguing, as usual, T.W.

Oh what a wonderful post this is~how brilliant to write about "that" cake-( we have all forgotten)I do remember this cake now that you mentioned it- I never made it, but I had the recipe given to me......it is long gone!You have warmed my soul!

Hi Susan - the "secret ingredient" certainly makes the cake very moist. But I think getting people to use more soup was also a goal :-)!

Jann - So glad you enjoyed it! I was so nice to revisit my grandmother's kitchen! I realized this recipe is actually even in "The Joy of Cooking!"

Thanks for offering this delightful post. I hope you don't mind but I'm linking.

Now, I'm off to visit your Hawaiian Wedding Cake post!