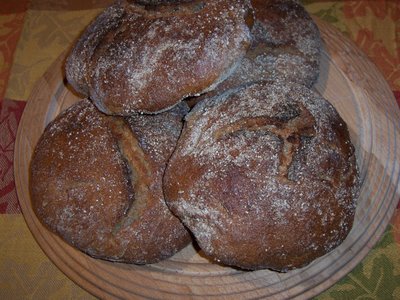 More Rye from the House of Pain: It is week four – the final week – of Classic European Breads at the French Culinary Institute and once again we are struggling with the German unit and rye sour starters. I want to know if there are any other countries in Europe that make bread, and how come our tour hasn’t visited there yet???

My fingernails are caked with grayish residue as I plunge my hands into yet another bin of cold, slick rye sour starter. The stuff bonds to surfaces so well that it could fill the cracks in my kitchen ceiling. I’ve washed my hands dozens of times, but it has given me a second skin. Whereas there is indeed a touch of romance in mixing and shaping a baguette, there is nothing remotely alluring about the preparation of rye bread. Think heavy duty home improvement project, and you’ll get the picture. Bottom line, it’s messy.

The Maitre Boulanger informs us that we are preparing “Vinchgauer,” a flatbread that is 70 percent rye and 30 percent wheat flour. And it only has an ingredient list that is about a mile long. My teammate, “A” is awfully perky today, and seems to be enjoying playing in the starter and inhaling fermented rye fumes. Its annoying and I’m somewhat less optimistic about our prospects.

I’ll admit the history on Vinchgauer is intriguing. The bread originated in Austria and contains several spices – coriander, fennel, and caraway. What were all those spices doing in Austria, you ask? The Maitre Boulanger tells us that Austria sat smack in the middle of the spice route from Asia and as merchants traveled through, they left samples behind.

After mixing, we scoop the mortar-like dough onto the bench and let it rest. It doesn’t seem to have much life in it, but there is some evidence of activity. We attempt to roll the sticky dough into balls, but end up scraping a lot of it off our palms and the bench. Then, the Maitre Boulanger shows us how to sprinkle the rounds with course rye flour and press them flat on a bagel board. The little pancakes look kind of gray and listless. Any remaining optimism has faded and I am convinced we are on our way to another kitchen disaster. (I haven’t shared our pumpernickel nightmare – it was just too painful.)

We slide the disks into the oven, and try and occupy ourselves with other tasks. Twenty minutes later, though, a bit of a culinary miracle has occurred in the oven. Our Vinchgaur is now deep reddish gold, puffed up like pita bread, and a heady aroma of spices is wafting from the oven. The Maitre Boulanger inspects the product and says “Hey, these look good.” I suspect he was skeptical too…

We cut into a loaf. It has a lovely cross pattern that has blossomed on top naturally and is about an inch-and-a-half tall at the center. The blend of rye and spices gives the Vinchgauer a deep rich flavor, with an essence licorice.

Maybe it was worth the effort.

Can you use a mixer to mix it? When they say European bread , does that mean you really have to knead it by hand?

Most of the work is done in large multi-batch mixers, and I'm told that all of this can be adapted for the home mixer. I need to spend some time in my own kitchen to figure that all out! However, much of the mess, and the stickiness comes when you have to remove the dough from the mixer and transfer it the to bench to rest. It's usually about 10 kilos of dough and all of that removal is done by hand, so you really have to dive into it!