A Bundle of Smoky Bacon 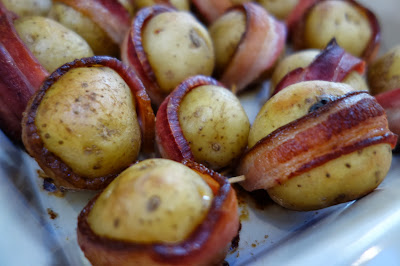 I’m still debating my favorite holiday gift of the season just past. Was it the Blue-ray disc of the Doctor Who Fiftieth Anniversary special, or the membership in Zingerman’s Bacon of the Month Club sent by my pal, Zany in Chicago?

With all due respect to the good Doctor (who has saved Earth’s bacon hundreds of times over), when it comes to indulgence and sheer crave factor, the Bacon of the Month Club has a lot going for it.

Membership has its privileges. The first delivery comes with a tempting slab of bacon, and a collector’s manual containing a slew of bacon lore to pig out on. 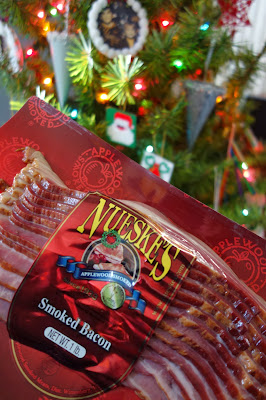 First up in the cavalcade of bacon is Nueske’s Applewood Smoked Bacon.   Made by Tanya Nueske in Wittenberg, Wisconsin, Nueske’s is wet cured for 24 hours in a brine mixture with sugar and spices and then smoked over Applewood for 24 hours.   It’s described as “meaty, pleasantly sweet and smoky. Bacon artisan Tanya Nueske says her grandfather started selling the bacon in 1933 and today she continues the craft of smoking. The bacon is smoked very slowly so that the flavor really permeates the cut of meat.

As the Nueske’s Applewood Smoked Bacon is a Christmas gift, I decided to incorporated it into my Christmas Day dinner menu, preparing Bacon Wrapped Potatoes. 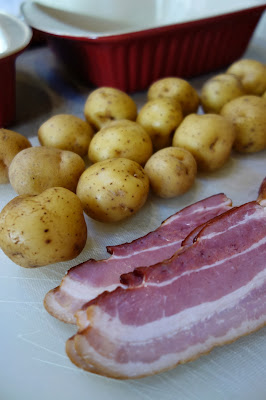 The recipe from Everyday Food can be found here. I wrap petite Yukon Gold Potatoes each in a ribbon of Nueske’s bacon, and bake in a 400F degree oven for 50 minutes.  The Nueske's handles beautifully. Ah, the slick feel, the marbling, and the luscious layers of delectable bacon fat! 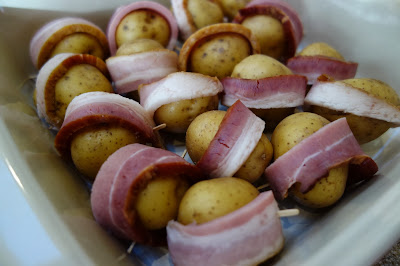 During the baking time, insanity nearly sets in as the intoxicating sweet aroma of smoked bacon fills the house.  The sound of "sizzle" and "pop" repeatedly draws me back to the oven to peer in. 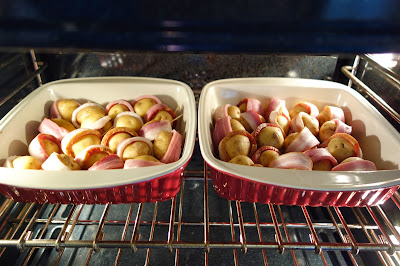 It is a miracle that I actually manage to refrain from sampling before Christmas dinner is served. 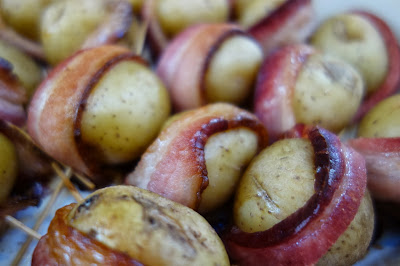 Hot from the oven, the Bacon Wrapped Potatoes are kind of like glistening little Christmas gifts!

I know the tradition is “visions of sugarplums,” but as I gleefully anticipate the next Zingerman's Bacon Club delivery, there are visions of bacon strips dancing through my head!

Lucky guests who received those little gifts for Christmas! Now a bacon wrapped potato is what I want for breakfast. And hats off to Zany for coming up with the perfect gift that keeps on giving.

Nueske's was my father-in-law's favorite and for many years in his later life, it was what he gave everyone for Christmas. Now that he's gone we continue the tradition and everyone in the family receives a big package of Nueske's. I can't wait to share your idea of bacon-wrapped potatoes with everyone. Perhaps it will become one of our family traditions too.
Sam

Oh that Zany, she sure knows the way to your heart, T.W. What a delicious gift!

I don't know why I have never thought to wrap little golden potatoes in bacon. Mushrooms yes, potatoes, not yet:) Of course any ol' bacon won't do. We are fortunate to have a local butcher who smokes his own bacon also. It is so darn good I've even considered learning how to smoke, lol...

Thank you so much for sharing, T.W. Now, I have a craving for bacon and eggs for breakfast!

I see a dickens cider concoction coming this year! ::)

I'm glad it didn't disappoint! I'm in shock you didn't steal any "samples" of the dish before you served it on Christmas!

Bacon of the month club? How totally awesome. Zany knows how to please, that's for sure.
Happy 2014, T. W.! What a yummy way to start the year.

I am thinking the bacon club is a pretty good gift idea from your friend.

There is something wonderful about a little bacon wrapped around yukon that sounds wonderful. No doubt it was delicious.

Now that truly is the gift that keeps on giving. What a wonderful present and everyone that got to eat the potatoes have a terrific gift as well.